Steve Wozniak, co-founder and shareholder of Apple came out today stating his views on smartphones and where they will be headed. Wozniak says Android will dominate the smartphone market much like Windows did to the PC market. 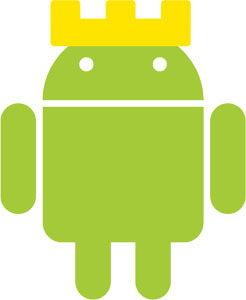 Wozniak compared what Android is going through to the early days of Windows via an interview with Dutch newspaper, De Telegraaf. The smartphone platform is still working on being polished and user satisfcation, as well as being consistant across platforms. One of the major arguements against Android is the fragmentation that is seen across various devices, which includes potential application compatibility issues.

Wozniak goes on to say that while Apple's iOS is currently better, Android phones, themselves, offer more features which in the end cater to users better. The iOS platform, according to the Apple co-founder, is leading in terms of quality but that lack of a wide variety of features will limit the success of the platform. He did stress however that the iPhone, "Has very few weak points. There aren't any real complaints and problems. In terms of quality, the iPhone is leading."

Wozniak also talked about Apple's own smartphone adventure. In 2004 Apple had worked with a well-known Japanese consumer electronics company to develop a revolutionary phone. Specifically, they "wanted something that could amaze the world."  The end result however wasn't quite revolutionary enough for Apple, so they shelved the project. Three years later a new attempt at bringing this revolutionary device was deployed on the masses in the form of the iPhone.

Concluding the interview, Wozniak noted that Nokia was "the brand from a previous generation." His suggestion to the Finland company was to introduce a new brand for the younger consumer generation.

From the man who developed the Apple I and Apple II, Android is going to be the dominant platform once they can unify an experience and increase user satisfaction in the same way that Windows took over the PC market. A bold statement, but one that may show tremendous insight to technology and patterns of how brands come to rise.

Update: It appears that Woz was misquoted by Da Telegraaf, and when he read the story that was rocketing around the web he commented on Engadget about the whole ordeal. Wozniak was actually talking about a comparison between iOS and Android voice commands, saying how Android's had a leg up but that Apple would soon also have the same abilities.

He did loosely say that Android will probably become more popular, but adding that Android is going "to be a lot like Windows... I'm not trying to put Android down, but I'm not suggesting it's better than iOS by any stretch of the imagination. But it can get greater marketshare and still be crappy."

Wozniak also mentions how "Almost every app I have is better on the iPhone."  Clearly he still believes in Apple full-heartedly and wasn't too happy about being misquoted on such a huge issue as that.