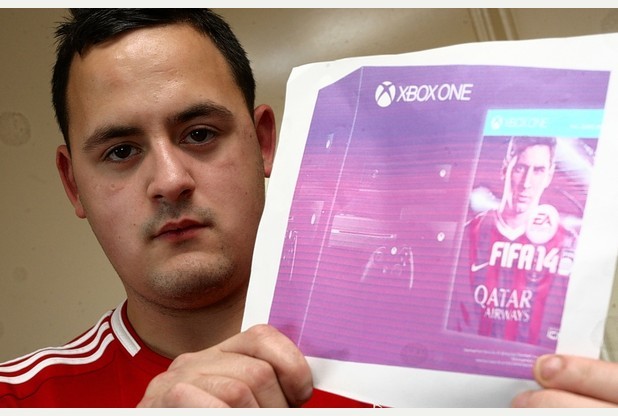 There's no shortage of people willing to empty your pockets through scams on the Internet, and some people on eBay are well known for listing what you think you're actually paying for, not what you're getting, with sneaky wording of the auction.

This brings us to the 19-year old Peter Clatworthy, father of a four-year old from Nottingham, England who bid on a Xbox One Day One edition on eBay, in which the seller reportedly clearly stated that the item was a photo of the console, not the console itself which he won and paid for.

The student had saved up in order to buy a limited edition Day One version of the console as a surprise Christmas present for his four-year-old son, McKenzie; However, the seller broke the rules on eBay by listing the item in the wrong section, it seems you really can't sell a sheet of paper in the electronics related section of the site, and as a result eBay had given the seller until Monday to refund the money back through PayPal, the money has since been refunded.

eBay has now banned the seller from using the site, stating the following; “The seller has been banned from eBay. We have also contacted the customer directly to arrange the refund as promised.”

Clatworthy previously made headlines in 2007 when, at age 12, he used his judo skills to catch a drunk-driver who had crashed into three cars on Ilkeston Road, Radford; this is clearly a person you don't want to mess with.