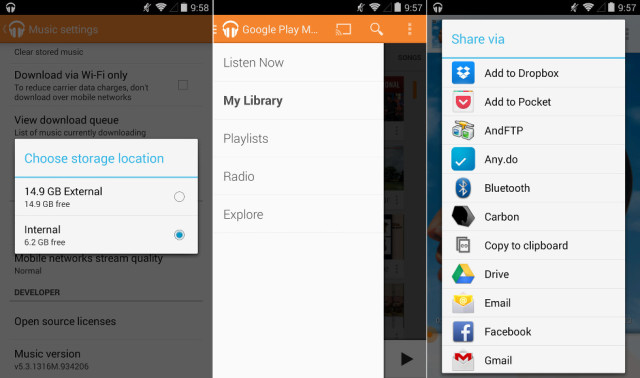 The updated Google Play Music app is now rolling out through the Play Store with some new features, including the much requested ability to cache music to an external SD card.

Google Play Music, the music store player app for Android has been updated today with the ability to store downloaded music on an external SD card and better link sharing options to social networks and other apps. In addition to these, Play Music now lets users shuffle an individual artist's music in All Access, which is Google's Spotify-like music streaming service launched earlier in the year. The app also features minor UI tweaks in the notification area.

Ever since the launch of Google Play Music, users have complained about the lack of support for external SD card caching. Many Android devices which have limited internal storage cannot make good use of Google's music service due to the restriction, now this is expected to change with the new update.

Unfortunately, the new update only supports the SD card feature on Android 4.4 KitKat which hasn't been widely available as of yet, and some older phones are receiving experimental support. The Nexus phones and tablets are the only devices in the market right now which have KitKat on them, but they do not have expandable storage which makes the update even more disappointing.

Users who would like to take advantage of this update before the phased roll-out hits their devices can head to Droid-Life and grab the APK.