For many of us this Christmas, Amazon will be our first - and in some cases, only - port of call when we finally get around to shopping for gifts for our loved ones. It's a natural choice, given that Amazon seems to sell just about everything we could possibly imagine, from high-quality electronics to cheap, cruddy stocking-fillers that probably won't make it to the new year before disappearing into the bin.

But there are those who would much prefer that you didn't do your shopping at Amazon this Christmas - or indeed at any time of year. Eight Members of Parliament (MPs) in the UK have publicly called on British shoppers to avoid the online retail giant, in response to the company's controversial tax policies.

Margaret Hodge MP, one of eight Members of Parliament calling on shoppers to boycott Amazon

The group of MPs is led by Margaret Hodge, the chair of the cross-party Public Accounts Committee, which earlier this year interrogated executives from Amazon and Google in televised sessions to question them over allegations of tax avoidance. Last December, Microsoft was also accused of avoiding £159m ($259m) in UK taxes in a single year. As CNET UK notes, last year, Amazon paid just £2.4m ($3.9m) of corporation tax in the UK last year, despite revenues of £4.3bn ($7bn) there. 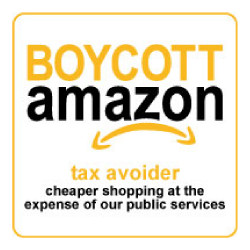 Hodge told Ethical Consumer that Amazon is a company that "aggressively avoids paying tax on the profits that they earn". She called the company's approach "morally wrong", adding that it "disadvantages every business... and therefore endangers British businesses and British jobs".

She said that her call to boycott Amazon is not "anti-business, it's pro-fairness". Explaining that the activities of companies such as Amazon create a situation where other companies cannot compete fairly, she said: "It's hugely important that we all take a stand and damage the reputation and business of companies that deliberately avoid paying their fair share of tax to the common purse for the common good."

She also said that "paying tax is part of the social compact. What makes us a society is that you agree to give according to your means or your profit... For big corporations to feel that they can choose whether or not to pay their fair share of tax is just wrong."

An Amazon spokesperson told CNET that the company "pays all applicable taxes in every jurisdiction that it operates within."