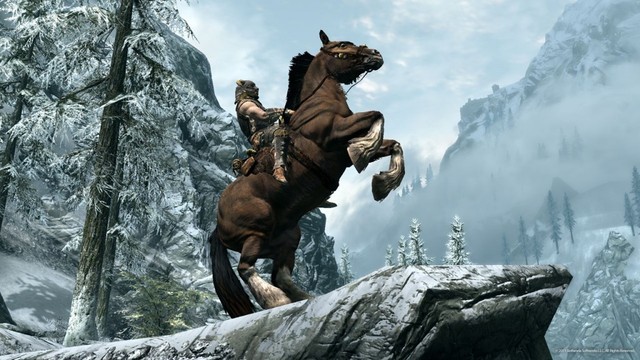 Bethesda Softworks has been known in the past to get a number of major Hollywood actors to voice roles in their various games. Its upcoming fantasy RPG The Elder Scrolls V: Skyrim is no exception. The publisher announced today that actors like Christopher Plummer, Max Von Sydow and Joan Allen will be among the many other people handling the voice chores for the game's characters. The company said that over 70 actors worked on the game and performed a total of over 60,000 lines of dialogue.

Allen will be making her video game voice acting debut with The Elder Scrolls V: Skyrim. She will portray Delphine, described as  "one of the last remaining members of the Blades – an ancient warrior society once sworn to protect the Emperor." Von Sydow, who was the voice behind the first trailer released for the game back in December 2010, will take on the role of Esbern, described as "a chronicler and agent of the Blades who has survived in hiding." Plummer will voice the character of Arngeir, "a powerful Greybeard elder".

Other actors that will be featured in the game include Battlestar Galactica's Michael Hogan, Babylon 5's Claudia Christian and Lynda Carter, best known for her role as TV's Wonder Woman. She will handle the role of Gormlaith Golden-Hilt in the game. Carter also happens to be married to Robert Altman, the president and CEO of Bethesda Softworks' parent company Zenimax Media. The Elder Scrolls V: Skyrim is due for release for the PC, Xbox 360 and PS3 platforms on November 11.