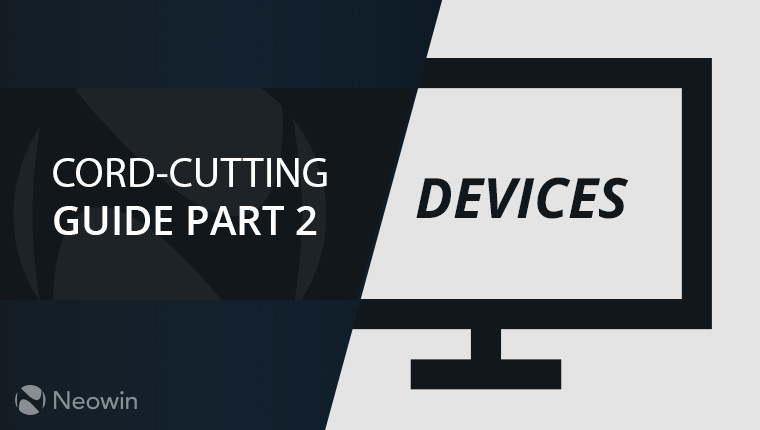 In the first chapter of our guide to cord-cutting, we discussed the various services that you can use to easily ditch your cable service. These included subscription based on-demand services like Netflix, Hulu, and Amazon Prime Video, live TV services like Sling TV and YouTube TV, and more.

But all of those services are useless if you don't have a device to watch them on. Surely, you're not going to cancel your cable subscription just so you can watch Netflix on the six-inch display of your smartphone.

No, you'll want to watch all of that glorious content on your big TV. The thing is, not all set-top boxes are equal. Some have different features, and they all support different services.

Sometimes, it's best to go with a school of thinking that a company that does just one thing does it the best. Roku makes set-top boxes and software for smart TVs, and since it's not a streaming service, it's platform-agnostic.

Like every other set-top box, it includes Netflix and Hulu, but you can also get Google Play Movies & TV and Amazon Video. You can even make purchases through the Amazon Video app, unlike on competing devices from Apple and Microsoft. You can also get a selection of games on the platform.

The set-top boxes also contain some unique features, such as a 3.5mm headphone jack in the remote control, allowing you to watch TV without waking up someone that might be sleeping. The devices are remarkably easy to set up too, as they're the only ones I've experienced that allow you to add all of your apps (or channels, as Roku calls them) through a web browser, and even sign into them, so you can avoid the onscreen keyboard.

Roku also has offerings at just about every price point. As I mentioned in part one of this guide, I grabbed a Roku Ultra for $50 by signing up with Sling TV, and that's normally $99. The Ultra is the top of the line model, offering 4K UHD streaming with HDR, a wired internet option, and a fast processor.

The Roku Express is a streaming stick that costs $29.99, and between that and the Ultra, you'll find the Express+, Streaming Stick, Streaming Stick+, Premiere, and Premiere+. Naturally, the features vary from device to device, with the lower end models only supporting HD streaming, and the higher end supporting 4K.

Amazon has been one of the more popular entries on the streaming device market, partially because it was one of the first to do an inexpensive streaming stick, and partly because of the ease of pirating content. The latter is due to Fire OS being a fork of Android, meaning that you can side-load any app that you want, and there are plenty of legitimate uses for that.

As you might expect, the Fire TV offers a very Amazon-centric experience. All of the apps that you need are there - including Netflix, Hulu, CW, Sling TV, and so on - but anything from Amazon is integrated into the OS shell itself. So, if you're looking for a movie on Netflix, you need to open the app, but if you're looking for it on Amazon, you don't. This is the biggest problem that I have with the software.

Amazon's Fire TVs all have Alexa included in them, although if you bought one of the early Fire TV Sticks you'll need to get the Voice Remote. This means that you can use it to control your smart home lights, ask it questions, play music, or utilize any of thousands of third-party skills.

Right now, Amazon is offering two different options for Fire TV hardware. The Fire TV Stick with Alexa Voice Remote is $39.99, and the All-New Fire TV with 4K Ultra HD and Alexa Voice Remote is $69.99. The latter seems to have replaced the main Fire TV model (seen above), which offered a wired internet option. The company is rumored to be working on a new model with far-field voice technology though.

The Xbox One X is my personal favorite solution for streaming, although I actually wouldn't say it's the best. My biggest beef with Xbox has to do with streaming 4K UHD movies and TV shows. Yes, Netflix, Hulu, and Amazon all work great, but if you want to buy a 4K movie, you can only do that through Microsoft's Movies & TV service, which I explained in the first part of this guide that I would never do, as you can only play them back on Xbox and Windows. Amazon doesn't sell 4K movies yet, and Google Play and iTunes don't have a presence on the console.

But what's really great about the Xbox One family of gaming consoles is that they are a one-stop shop for all of your entertainment needs. If you want to play a game of Halo, you can do that, or you can go to the Netflix app and stream The Crown. Other streaming devices do have games, but those are more mobile-type games.

The Xbox One also comes with Microsoft's digital assistant, Cortana. The great thing about Cortana is that it works across your console, phone, PC, and more. For example, if you tell your Xbox to remind you to pick up something on your way to work, Cortana can give you a reminder on your phone as you're leaving, based on your location.

And of course, the Xbox does run its own special SKU of Windows 10, which means that you get OneDrive support, UWP apps, and Xbox Play Anywhere, which allows you to play the same game on your Xbox and PC with your progress syncing between them.

The Xbox One family of consoles includes the original Xbox One, Xbox One S, and Xbox One X. The original model only supported streaming at up to 1080p, while the One S added 4K and HDR streaming. The One X, however, adds the ability to play games in 4K and HDR, so that's what you'd get if you want the best of the best.

Apple TV is what you'd get if you're super invested in the Apple ecosystem and you're really sure that you want to stay there. Obviously, it supports Netflix and Hulu, and it just got support from Amazon last week, but the OS is based on iTunes and iCloud.

Apple does offer 4K content, and you can use it to browse your iCloud photos and listen to Apple Music. Again, this all assumes that you want to stay in the Apple ecosystem, because iTunes is only available on Apple devices and Windows.

Just like with Amazon's and Microsoft's offerings, Apple's comes with its own digital assistant, Siri. You can use it to search for content, control media playback and more.

Apple still sells its fourth-generation TV, which was the first to include the App Store, for $149. For 4K though, you'll need the new Apple TV 4K, which costs $179 and $199 for 32GB and 64GB of storage, respectively.

Google's Chromecast was also one of the first streaming dongles, offering an inexpensive, $35 option that required little setup. Since then, Google refreshed it with a new model with features like upgraded Wi-Fi, and while the price is the same, there's also now a $69 Chromecast Ultra that supports 4K.

The unique thing about Chromecast is that it doesn't use a remote control. Instead, you control it from your smartphone from within the app that you're casting from. Any app that supports Google Cast will display a button on it, and after tapping the button, it will show you a list of devices to play on. Once you cast the content, the Chromecast takes over. You can also use the device for media controls during playback.

Plenty of apps support the family of devices, such as Netflix, Hulu, and Google Play Movies & TV. Unfortunately, Amazon has still not chosen to support it, which will be a dealbreaker for many.

Personally, as much as I love the idea of Chromecast, I hate not having a remote control. Controlling a device with a phone is a pain when you have to unlock your phone just to pause a movie to go to the bathroom.

Starting at $149, the Nvidia Shield packs a Tegra K1 processor and a 256-core GPU. It supports 4K HDR content, and it runs off of the Android TV platform.

The good thing about Android TV is that while it has Google Cast functionality built into it, and you can still get your apps on the device, such as Netflix, Hulu, and so on. The device also has an emphasis on gaming, and if your PC has an Nvidia GeForce GTX graphics card, you can even cast your games to your TV.

Being Android TV, it also has Google Assistant, meaning that you can control your smart home devices and such.

Nvidia's offering isn't the only Android TV device on the market, although it is probably the only one that you'll find in a store in the United States. Google made the Nexus Player, although that's no longer supported, and Xiaomi makes the Mi Box.

I saved smart TVs for last because I personally have mixed feelings about them. On one hand, it's nearly impossible to get a good 4K UHD TV these days that doesn't connect to the internet and have apps like Netflix and Hulu, but on the other hand, all computer hardware needs to be replaced eventually, and it's cheaper to buy a $99 Roku Ultra than a brand-new Samsung QLED TV.

I've also found many smart TV brands to be poorly supported when it comes to apps. You might find that your Netflix app doesn't have the latest features, or that the latest apps aren't available. The best bet for app support is going to either be to go with a major brand like Samsung, or go for a Roku TV or Android TV.

Ultimately, you have to choose the device that's right for you. They all have their various pros and cons, and some are much better for people that are loyal to certain services.

Although if there is one device that works for the most people, it's probably Roku. As I noted, it works because it's platform agnostic, which is something that I look for in devices.

Personally, I rotate between an Amazon Fire TV (with the Ethernet connection), Xbox One X, and Roku Ultra. I do have a Chromecast and third- and fourth-generation Apple TVs, but I rarely use them.