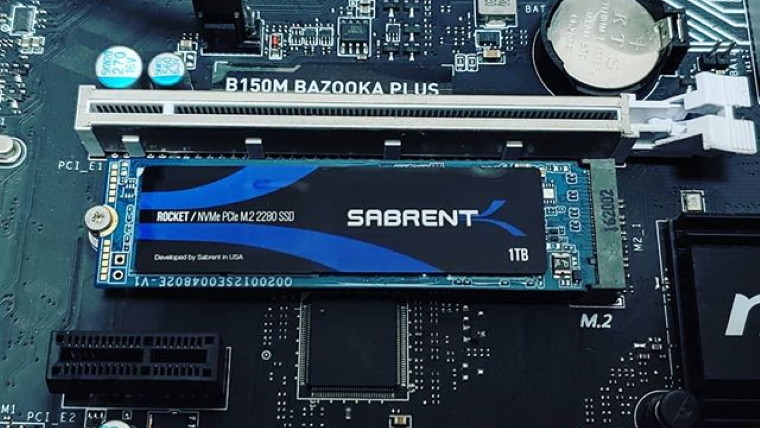 Amazon is currently selling the Sabrent 1TB Rocket NVMe PCIe M.2 2280 at just $109.98, which is a great deal for an NVMe SSD that is based on Toshiba's BiCS 3D TLC NAND flash memory. According to the manufacturer, performance speeds can reach up to 3,450 MB/s (read) and 3,000 MB/s (write) and according to some of the reviews left by buyers on the Amazon page, owners of the drive has been left impressed by the speeds offered up by this PCIe 3.0 drive.

Thankfully we're starting to see higher capacity storage on NVMe M.2 slot drives at reasonable prices, but most drives around $100 offer far less speed, such as the Crucial P1 1TB 3D NAND NVMe PCIe M.2 SSD, with a rated sequential reads/writes of up to 2,000/1,700 MB/s that is currently selling for $99.95, and the even lesser capacity (but quick) 500GB WD Black SN750 is on sale for $99.99, which is still $30 off its normal retail price, and $8 cheaper than when we featured it back in May.

The Sabrent 1TB Rocket NVMe PCIe M.2 2280 PCIe Gen3 x4 interface is PCIe 3.1 and NVMe 1.3 compliant and offers a utility that enables users to re-format the Rocket drive and choose the sector size of their liking, either 512-bytes or 4K bytes. Although the Amazon page currently does not state it, a quick search online shows that the drive normally sells for $130, and has a recommended retail price of $163.59, so however you look at it, it is a great deal!