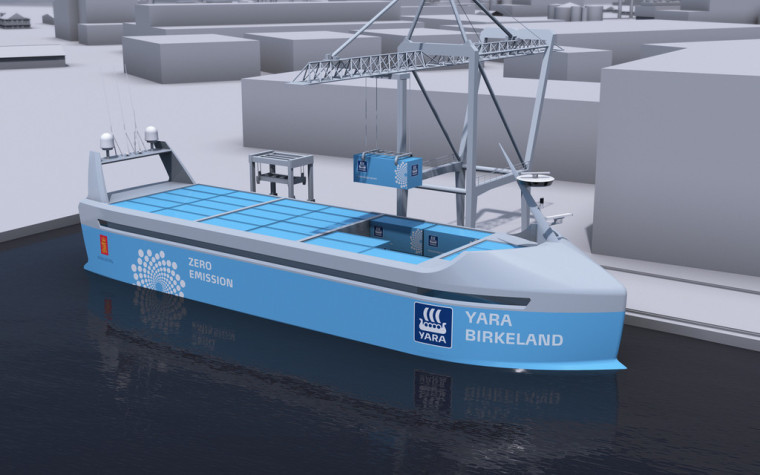 According to most companies, autonomous vehicles are the future of transportation. Various automobile manufacturers like Tesla, Toyota, GM, and even tech companies like Google’s Waymo, are all working on bringing autonomous cars to the masses in a bid to make traveling safer and more efficient. Others want to provide the processing power, the connectivity, and the software those cars and their supporting networks will require. Anything from drones and trucks to trains and airplanes are also getting the autonomous treatment.

Two Norwegian companies, agriculture firm, Yara International ASA, and guidance systems builder, Kongsberg Gruppen ASA, have now decided to build the world’s first crewless, autonomously operated ship. The Yara Birkeland, as the vessel is called, is already under development and its construction is scheduled to be completed in late 2018, when it will start to carry fertilizer from a production facility to the port of Larvik, a 37-mile route.

The 100-container electric ship will cost three times as much as a comparable conventional ship, or around $25 million, but without the need for a crew or fuel, annual operating costs will be reduced by up to 90 percent. In addition, the ship is expected to replace 40,000 truck drives a year, cutting emissions by a huge amount.

In the future, the company hopes to build bigger ships that will be used for longer routes, but is waiting for the International Maritime Organization to decide on international regulations for autonomous vessels before considering such investments.