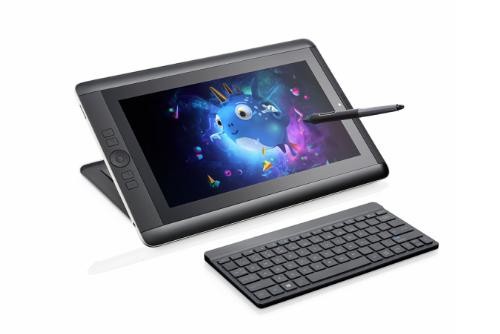 Wacom is well known for their digital graphics styluses and drawing tablets and today, the company revealed plans to launch a full fledged Windows 8 tablet product, the Cintiq Companion, that's being designed for the serious graphics artist and designer who wants to work on the go.

Wacom's press release states that there will be two models of the Cintiq Companion that will be sold. Both will have a 13.3 inch touchscreen, a third generation Intel Core processor and 8 GB of memory inside, along with an adjustable stand and a eight megapixel camera. One model will have a standard version of Windows 8 installed with 256 GB of SSD storage and the price of $1,999. The other model will have Windows 8 Pro and 512 GB of SSD storage for $2,499.

As with other Wacom hardware products, the Cintiq Companion will have its own exclusive features such as ExpressKeys, Rocker Ring and Radial Menu. It will also include the Pro Pen with 2,048 levels of pressure sensitivity. The tablets are expected to ship sometime in October.

For those folks who want something a bit cheaper, Wacom has also announced the Cintiq Companion Hybrid, an Android 4.2 tablet with the same display size as the Windows 8 version. It has an quad-core NVIDIA Tegra 4 processor and comes in 16 GB and 32 GB versions. It will launch in September for the starting price of $1,499.