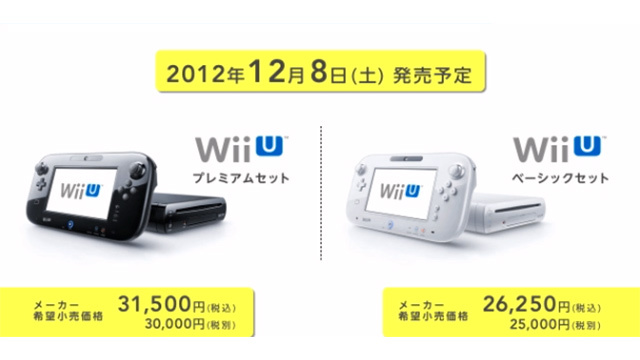 Earlier today, Nintendo announced the price and Japanese release date for its upcoming Wii U console. The new Nintendo gaming console will go on sale Dec. 8, and the base model will cost ¥26,250 (approximately $337 in U.S. currency) while a premium model will cost ¥31,500 ($408).

As noted by Polygon, the base model is more expensive than both the entry-level Xbox 360 and the cheapest PlayStation 3 in Japan. In Japan, the 4GB Xbox 360 costs ¥19,800 ($255), while the cheapest PlayStation 3 costs ¥24,980 ($322). The base Wii U model and premium model are primarily differentiated through their storage capacity and color – the base model comes in white and has 8GB of flash storage, and the premium console is black and has 32GB of flash storage. Additionally, the premium version will come bundled with an HDMI cable and charging stand for the Wii U's GamePad tablet controller.

In addition to the pricing and release date information, Nintendo gave a few basic specifications for some of the Wii U's components. The console will have 2GB of memory, 1GB of which will be for games and 1GB that will be for reserved for system memory. The discs utilized by the Wii U will come in a 25GB capacity, and the system will also be backwards-compatible with all the original Wii's accessories, including the Wiimote.

Nintendo of America will announce pricing and release date information for the United States at an event in New York later this morning. The company will also be announcing European pricing later today.