How many times has your PC taken a while to start up thanks to its chkdsk utility tool?  In case you are not familiar with the term, chkdsk basically tries to repair your hard drive of problems like bad sectors, lost clusters and the like. Today, the official Windows 8 developer blog talks about how Microsoft is trying to improve chkdsk for Windows 8, along with the NTFS health model.

The changes are being made primarily because PC hard drives are getting bigger and bigger, even as Microsoft has tried to optimize how chkdsk works in Windows XP and Windows 7. Microsoft states. "Our design included changes both in the file system and the chkdsk utility to ensure the best availability." 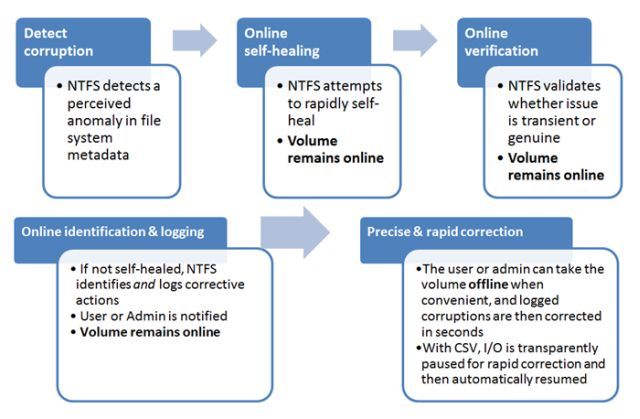 The above diagram shows how the new NTFS model is supposed to work. One is online self-healing. Microsoft says, "In Windows 8 we increased the number of issues that can be handled online and hence reduced any further need for chkdsk." Another is new to Windows 8; the spot verification service. The company says:

Windows 8 also only runs scheduled maintenance tasks on disks when needs, such as during a PC's idle time, and can ever perform those tasks while other programs run in the foreground.

Finally Microsoft says the disk can be taken offline if need be. The blog states, "The downtime from this operation, called 'Spotfix,' takes only seconds, and on Windows Server 8 systems with cluster shared volumes, we’ve eliminated this downtime completely. With this new model, chkdsk offline run time is now directly proportional to the number of corruptions, rather than being proportional to the number of files as in the old model." 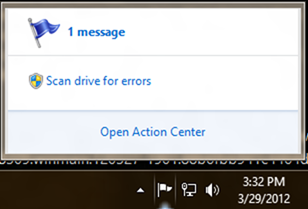 On client systems, you can restart the PC to fix all the file system issues logged in the previous step. The restart is quick (adding just a few additional seconds) and the PC is returned to a healthy state. For Windows Server 8 systems, a restart is unnecessary to fix corruptions on data volumes. Administrators can simply schedule a spot fix during the next maintenance window.