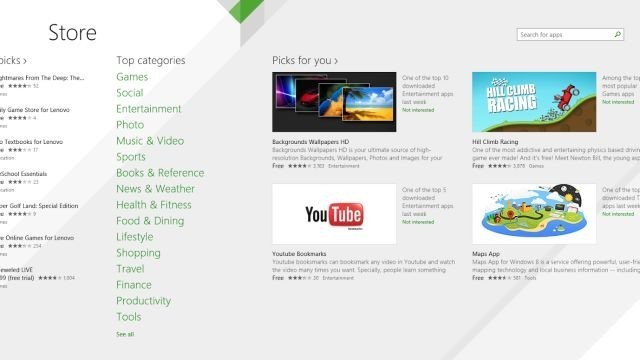 The number of Modern apps for Windows 8 and 8.1 has now surpassed the 150,000 milestone. That's the word from MetroScanner, a website that monitors the number of apps that Microsoft publishes in the store on a daily basis.

The exact number, as of today, is 150,086, according to the website. While at one point the number of published apps seemed to accelerate in the store, the pace has definitely slowed in the past several months. Windows 8 launched on October 2012 and the Windows Store reached the 100,000 app milestone in July 2013, nine months later. Eight months since that mark, the store has only added 50,000 apps, a nearly 50 percent drop in growth.

The sheer numbers are not quite as important to many people as the quality of the apps in the store. In the past few months, the official Windows 8.1 Facebook app has been released along with Flipboard, and most recently the beta of the VLC media player, However, there are still some major app gaps in the store in terms of support with apps like Twitter only receiving incremental updates.

Recently, leaked Microsoft documents showed that the company has plans to allow developers to create an app that will work with Windows 8 and Windows Phone with a minimal amount of extra coding effort. If that is put in place, we could see a new boost in the number of  published Windows 8 apps.