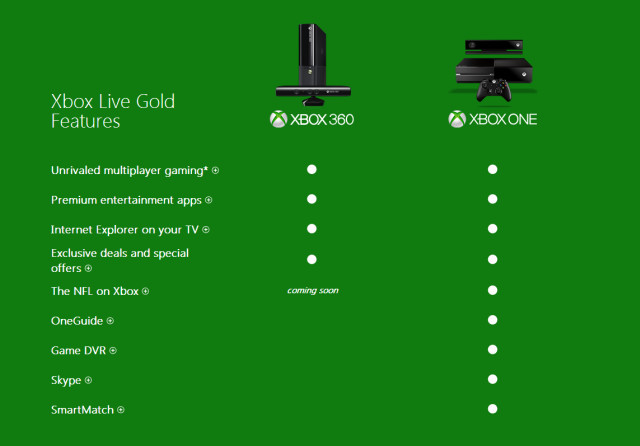 In August, a list of features for the Xbox One that would require a paid Xbox Live Gold subscription was revealed.  One of them was the OneGuide feature that will allow the game console to take over control of the cable or satellite TV guide features by connecting an HDMI line from a cable box to the HDMI In port of the console.

In the listing of the Xbox Live Gold features for OneGuide, Microsoft states, "Xbox Live Gold members with Xbox One can experience a customized view of what’s on TV, and see what’s trending within the Xbox Live community." Now, a new report from GameFront states that at least some of the OneGuide features may not require an Xbox Live Gold subscription after all.

The article claims that, in an interview with Microsoft Xbox exec Albert Penello during PAX Prime this weekend, he stated that Xbox One owners  “... can do the HDMI pass through" and that they can " ... do the TV guide stuff without Gold."

However, as the article points out, this would seem to be a change from what Microsoft has said in the past concerning OneGuide. It's possible that the feature that lets people see what's trending on TV in the Xbox Live community will require Gold but the basic TV guide functionality can work without it. We have contacted Microsoft for clarification on what aspects of OneGuide will require Xbox Live Gold on the Xbox One and which will be free for all owners.