A while back, popular video sharing site YouTube implemented pre-video advertisements as part of the Google AdWords suite. Some users have had mixed thoughts on the issue, especially when they want to quickly pull up a video then have to watch the ad. YouTube has just announced a new method of using pre-video ads called TrueView. 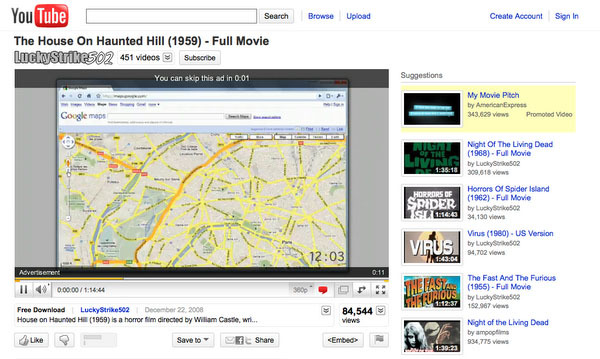 Integrated with Google AdWords, the announcement of TrueView came to the AdWords blog, stating that users now have the option to skip over pre-video advertisements. Viewers who live in the U.S and Canada are give the option in any video to skip an ad five seconds into it. Users in the UK are also able to use TrueView, however the amount of videos with which it can be used with appear to be limited.

Obviously, advertisers would not be pleased if that was the only change made, and this second feature is where TrueView derives its name.

Like the way Hulu allows the user to select advertisements relevant to them, TrueView will operate in the same way. When the advertisements are relevant, the chance of a user watching it drastically go up. In their early testing, YouTube has found, "view-through rates of 20-70%. A view-through rate measures how many viewers have opted-in to watch your ad - a valuable signal which you can use in connecting the right message with the right audience at the right time."

Delivering content more specified for the user is more likely to keep their interest and have them opt in to watch the full advertisement. Advertisers are now only charged for the full showing of the ad, or if it has been viewed or at least 30 seconds of, whichever amount of time is shorter between the two.

Advertiser GoPro which, "makes and sells the HD HERO line of wearable, gear-mountable HD cameras," has seen promising results, and their Director of Online Marketing, Lee Topar said in a statement:

We like how TrueView Video Ads give us the ability to target our audience, and gives viewers the choice to opt-in to watch our ads. Thus far, we’ve seen about a 40% view-through rate -- and since we only pay when potential customers actually watch a video, we have more control over our budget.

Other advertisers have seen similar numbers, showing about 40% of users who will sit through the entire ad. This concept was inspired by YouTube's experience with Promoted Videos, and has shown that when given the choice, users will tend to purposefully click on ads that are relevant to them. TrueView comes as a welcome change for both the users and advertisers of YouTube's video service.