It was late last year when Capcom announced the next iteration in its Marvel vs. Capcom series, Marvel vs. Capcom: Infinite. The legendary fighting series will change things up a bit for its 2017 release, introducing a 2-v-2 format, Infinity Stones, and more. Today, the firm announced that the game will come with a story mode, in addition to the traditional arcade mode.

Capcom also introduced more characters that will make an appearance in the game like Ultron, Hulk, Thor, Hawkeye, Rocket Raccoon, Chun-Li, Strider Hiryu, and Chris Redfield from Resident Evil. The latest reveal also showed off the title's new boss, Ultron Sigma, which is a combination of Ultron from Marvel and Sigma of Mega Man fame.

Starting today, it can be pre-ordered and will come in three different editions. As part of the pre-order bonus, if you choose the Standard Edition which retails for $59.99, you'll receive Warrior Thor and Evil Ryu costumes. Those that step it up to the Deluxe Edition for $89.99, will get the two aforementioned costumes, plus Gladiator Hulk and Command Mission X, along with a 2017 Character Pass, which will give players access to six post-launch characters. 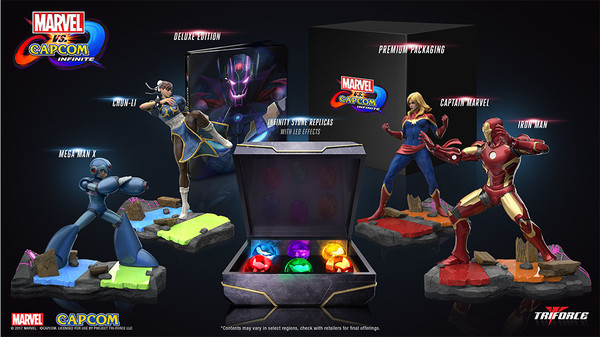 Finally, the Collector's Edition, which will run for $199.99, will include the above figurines with base stands, Infinity Stones with LED illumination, and the Deluxe Edition of the game. Marvel vs. Capcom: Infinite will arrive on the PlayStation 4, Xbox One, and PC on September 19.