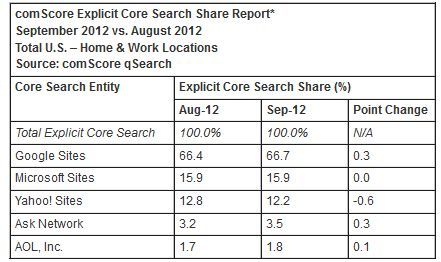 Microsoft has been trying to make inroads in the search engine business for a few years now. Most recently, the company launched its "Bing it on" campaign where it tried to show how its Bing search engine was, in its opinion, better than Google.

This week, ComScore released its latest data on the Internet search market share in the US for September 2012. Unfortunately for Microsoft, its percentage of the US search space didn't grow compared to August. It stayed the same at 15.9 percent.

ComCcore added that over 16.3 billion explicit core searches were made in the US during September. Google-based sites generated 10.9 billion core searches and Microsoft-based sites were a distant second with 2.6 billion searches.

Yes, there are still some people who apparently search the Internet on Ask.com and AOL.com. They held 3.5 and 1.8 percent of the search market, respectively, in September.