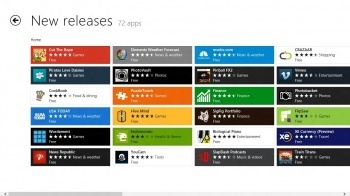 Now the two major game trade organizations in the UK have expressed their feelings on the matter, and they don't seem to be happy. Gamesindustry.biz reports that Dr. Richard Wilson, CEO of TIGA, believes that Microsoft's rules could keep some game publishers and developers from releasing titles on the Windows Store.

He added, "This would be a great shame. However, games developers and digital publishers now have considerable choice over where to publish their games. If Microsoft will not welcome adult rated games then some developers will simply take their games to other publishers and platform owners. Hopefully Microsoft will change its position."

Dr. Jo Twist, of the UK game trade group UKIE, seems to suggest that Microsoft's rules against PEGI 18 games are not needed. Twist says, "Other online marketplaces have codes of conduct in place and monitoring to prevent inappropriate behaviour. On top of that, all the main consoles and PC operating systems have parental controls (linked to age ratings)."

Neowin contacted Microsoft for comment. A spokesperson for the company would not comment directly on the matter, but instead only offered links to the Windows Dev Center website, where the company talks about its app certification requirements and ratings.