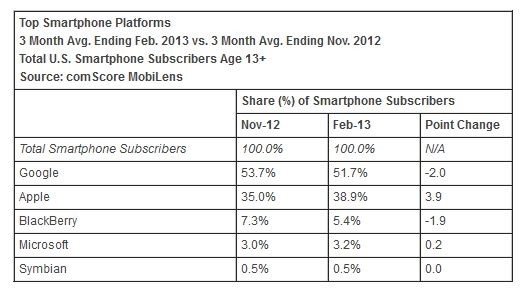 The new chart shows that Microsoft's share went up from 3.0 to 3.2 percent during that time period, a gain of two tenths of one percent. By contrast Google's Android OS went down two full percentage points in that same three month period, from 53.7 percent to 51.7 percent. Apple's iOS has a huge gain between November 2012 and February 2013, from 35 percent to 38.9 percent, a gain of 3.9 percent.

The news continues to be bad for BlackBerry, as its market share went down 1.9 percent in ComScore's latest numbers, from 7.3 to 5.4 percent. The period was just before BlackBerry started selling the Z10 smartphone, with the BlackBerry 10 OS, in the US.

Apple still is the single biggest smartphone maker in the US with 38.9 percent, followed by  Samsung with 21.3 percent, HTC with 9.3 percent, Motorola with 8.4 percent and G with 6.8 percent. ComScore says that a total of 133.7 million people in the US now own a smartphone.