We're now living in a world where high-resolution displays are everywhere. From large TVs to smartphones, the demand for high-quality images has also increased. That's why Google Research introduced a new technology named RAISR (Rapid and Accurate Image Super-Resolution) last year, in an attempt to harness the power of machine learning to produce high-quality versions of low-resolution images. According to Google, its new technology is also ready for mobile use:

"RAISR produces results that are comparable to or better than the currently available super-resolution methods, and does so roughly 10 to 100 times faster, allowing it to be run on a typical mobile device in real-time."

The company explained that RAISR uses machine learning to train the algorithm on a pair of images, one low quality, the other high quality. This training allows the selection of filters that are applied to each pixel of the low-resolution image in order to recreate details that are of comparable quality to the original, as you can see in the image below.

But Google seems to have found another use for the RAISR technology, according to a blog post this week. The company has stated that by using RAISR to display some of the large images on Google+, it was able to reduce the use of bandwidth by up to 75 percent per image. That was achieved because the reconstruction of a low-resolution image creates a new file smaller than the original, maintaining a comparable quality, as explained above. 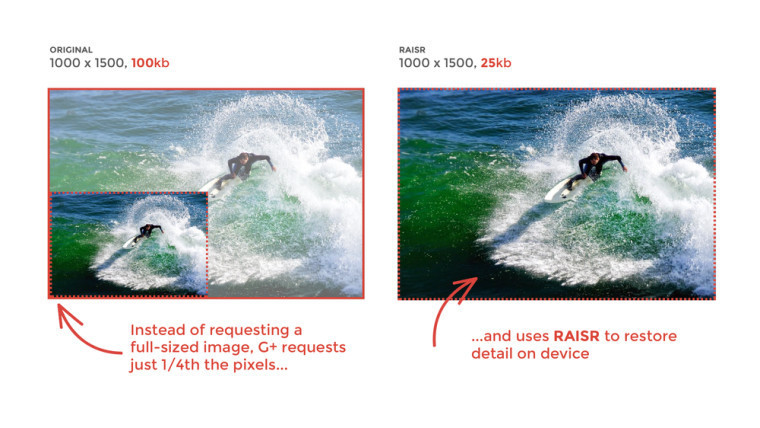 Finally, Google has stated that only a subset of Android devices is already using the technology, as it has just started rolling it out. Nevertheless, RAISR is currently being used on more than 1 billion images each week, and has saved about a third of the total bandwidth used by the owners of those devices.