The annual World Mobile Congress is scheduled to be held on February 25-28 in Barcelona, Spain. While there are expected to be many product reveals from smartphone companies at the event, one company has decided to make a big announcement a week ahead of WMC 2013.

Many media outlets, including CNet, report they have received an invitation from HTC to attend a press event in either New York City or London on February 19. Other than the date, time and location of these events, there's no other official information on what HTC might be revealing. 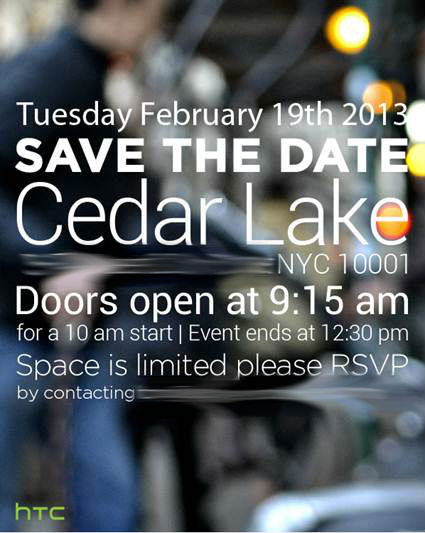 It's interesting that HTC has apparently decided to hold a major press conference just before the start of WMC 2013. It may show that the company doesn't feel that the trade show is the best venue for its big announcement and didn't want to share the spotlight with other companies that are exhibiting at the show.

There are rumors that HTC has plans to launch an Android smartphone with a 5-inch screen in 2013 and it's likely that the February 19 reveal will be of an Android-based device. There are other reports that claimed HTC was planning to launch a five inch phone based on Windows Phone 8 but that those plans were cancelled because of Microsoft's guidelines that would not allow screen resolutions as high as those of an Android phone.