In July, BlackBerry unveiled its second Android handset, the DTEK50, calling it "the world's most secure Android smartphone". However, as many people quickly spotted, the DTEK50 was little more than a rebadged Alcatel Idol 4, with a few tweaks, including a "hardened" version of Android 6.0 Marshmallow. 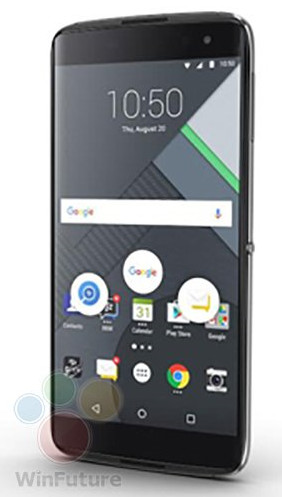 Now, the company is preparing to launch another Android handset, the DTEK60. Last week, in an unfortunate blunder, BlackBerry published a page on its site - which included "do-not-publish" in its URL - detailing all of the key specs of the device ahead of its official announcement. The device still hasn't been unveiled, but WinFuture has got its hands on images of the DTEK60, confirming that it's based heavily on another Alcatel device.

Externally, the DTEK60 seems to be virtually identical to the Alcatel Idol 4S on which it's based, including the location of the camera and fingerprint sensor. The only obvious difference to the casual observer is the BlackBerry logo on the rear of the device.

But BlackBerry has made a few changes to push the device from the upper-mid-range well into the flagship-class. The DTEK60 will have a Snapdragon 820 processor, rather than the Alcatel's Snapdragon 652; 4GB of RAM, rather than 3GB; and a 21-megapixel rear camera, compared with the 16-megapixel shooter on the Idol 4S.

Aside from those changes, the DTEK60 will apparently be identical to the 4S in terms of its key hardware specs, although buyers can expect to see similar Android security improvements to those offered on the smaller DTEK50.

The DTEK60 will reportedly be available to buy from October 11, priced at $699 CAD in BlackBerry's home market of Canada; this equates to around $530 USD, but bear in mind that direct currency conversions don't always equate to actual localized pricing.