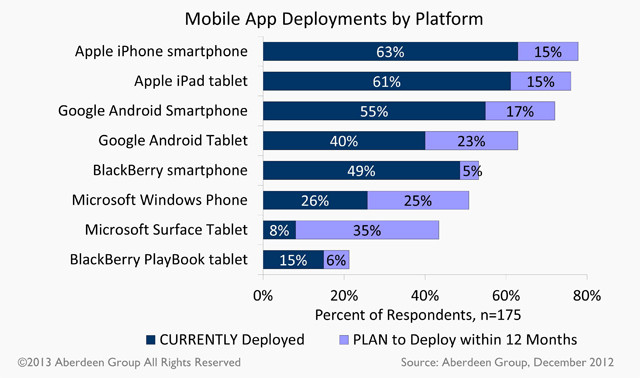 Many companies are planning on deploying Windows apps in the next year, a new study claims.

According to a report by CIO, Microsoft's mobile platforms should see a large amount of growth in the enterprise market as companies look to deploy apps on Microsoft platforms in the next year. Aberdeen surveyed 348 organizations in November and December about their mobile strategy at the time and for the upcoming year, and Microsoft came out on top in terms of apps in development.

The survey revealed that 35 percent of companies responding plan to "develop apps on the Surface tablet over the next 12 months," meaning Windows 8 and/or Windows RT apps, while 8 percent already have apps for the platforms deployed. Windows Phone also saw similar support, with 25 percent of companies surveyed planning on deploying apps within the next year on top of the current 26 percent that already deployed apps.

Andrew Borg, a research director at Aberdeen, told CIO that the results were extremely positive for Microsoft.

"The data shows that IT is holding out hope that Microsoft's mobile strategy will be well-integrated with their overall data center and cloud strategy," he said. "You might say IT has been waiting for Microsoft to make its enterprise mobile play."

Microsoft's gain was Apple's misfortune, as companies are slowing their deployment of apps for Apple's iPad and iPhone, although the overwhelming majority of companies already support the iOS platforms.

While the survey doesn't have any bearing on consumer apps for Windows platforms, Microsoft's desktop platform should see increased support as consumers continue to increase adoption. Windows 8 is now used by more than 10 percent of Steam users, for instance, while its overall market share on all computers is about 3.31 percent, according to new analytic data.