We know the Xbox One will eventually allow streaming games to other devices, but thanks to a preview build of the console’s OS, it looks like that feature may be coming as soon as next month.

Yesterday the first preview build of the May Xbox One update started rolling out to previewers, and a number of eagle-eyed members have spotted an interesting addition in the Settings pane: the option to allow game streaming to other devices. 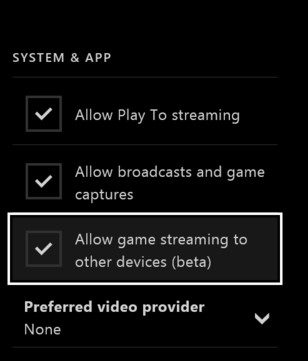 Phil Spencer demoed this feature on stage back in January, showing the integration between the Xbox consoles and the Xbox app found on Windows 10. However, back then he never mentioned a timeline for when the feature would actually reach consumers, leaving many to speculate that this wouldn’t be available until Windows 10 officially launches.

But, if this update is to be believed, the feature may come to users as soon as May. Of course, right now streaming isn’t available even for previewers, because the desktop Xbox app also needs to be updated with some new functionality. We know the app is supposed to receive monthly updates just like the console, so for now we’re waiting patiently for that.