A previously undisclosed Microsoft Research project, dubbed "Menlo", has been revealed today as a prototype mobile phone and operating system.

Previously thought to be a tablet computer, the so-called Menlo project now looks to be a prototype mobile project based around user experiences with navigation on mobile devices. The evidence, which was discovered in a research paper entitled "User Experiences with Activity-Based Navigation on Mobile Devices" by ZDNet's Mary-Jo Foley, labels the Menlo device as being a "prototype" with a "touch screen" and of all things a "barometer".

While it's unlikely the "Menlo" project will ever become publicly available, it seems the device has been designed with a focus on testing a new Silverlight-based prototype application called "Greenfield", which allows users to find a parked car.

"To explore activity-based navigation we designed Greenfield, an application that provides an activity-based trail to a parked car," the description within the paper reads.

"This is useful both in situations where one has lost one's car and needs to find it, but also in finding a car parked by someone else, e.g. a private car parked by another family member, or a shared business vehicle."

Foley suggests Microsoft could still be developing a new mobile operating system (aside from the upcoming Windows Phone 7) that could run on a "variety of processors". 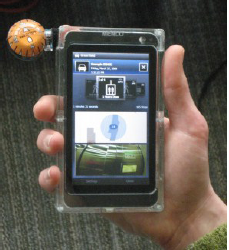