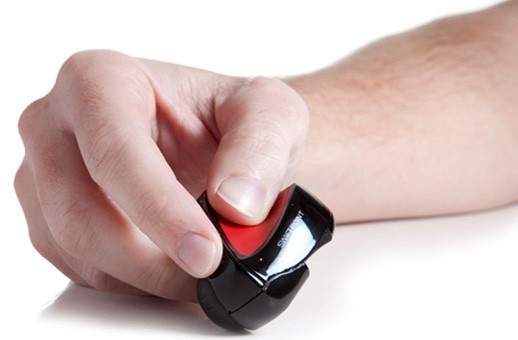 New Zealand based firm "Swiftpoint" is trying to revolutionize the way you use your laptop mouse from tomorrow with its new product, an ultra-portable, fast charging laptop mouse.

The revolutionary device is tiny, held like a pen and designed to be used on a laptop's palm rest, but can even be used to glide across a laptop keyboard. According to Stuff.co.nz, the mouse will sell initially for $125 NZD ($69.95 USD), and is charged through a USB dock. Apparently, a 30 second charge will give just over an hours use and a 90 minute charge will give the mouse almost four weeks of use.

Swiftpoint Chief Executive, Grant Odgers said that the company had "hundreds of preorders for the mouse" and that "one of the things that frustrates people is the battery running out on their mouse ... With our one, you can be up and running again really quickly." Odgers continued to say that they are releasing the mouse to help with productivity for laptop users, because there is no real replacement for them yet, even with Tablet PC's on the rise; "[Tablets] are more for entertainment. If you want to do anything productive you wouldn't really use an iPad. We don't think people will buy an iPad instead of a laptop."

The company will be going head-to-head with larger manufacturers such as Logitech and was required to be innovative to compete. Swiftpoint actually emerged back in 2008, with two obscure mouse designs, the Triped and the Slider, though nothing eventuated from the announcements about the products.

Swiftpoint also claims the mouse is 30-40% more accurate than the laptop touchpad, and says the devices will be available through Amazon.com and its own website beginning tomorrow. The device looks to change the way laptop mice are used, and is designed to be easily portable. It will be interesting to see if the device is comfortable to use, and as easy to use as the company claims.