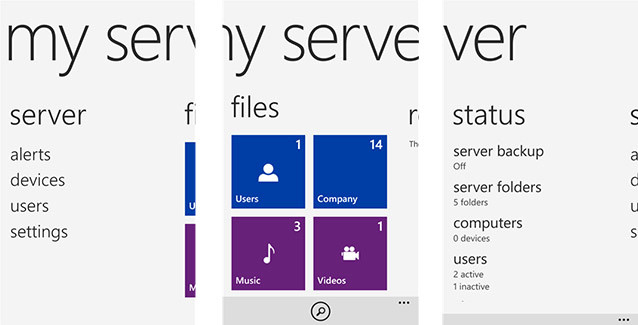 While we are still waiting for Microsoft to release a full Windows 8.1 remote desktop app for Windows Phone users, the company did release an app this week that lets owners of those devices perform remote tasks on Windows Server 2012 R2 Essentials from their smartphone.

The My Server 2012 R2 app, currently available to download for free from the Windows Phone Store, has a pretty bare bones description from Microsoft. It states:

My Server for Windows Phone is an application designed to help you keep seamlessly connected to your server resources through Windows smart phones. With My Server, you can manage users, devices, alerts, and access shared files in Windows Server 2012 R2 Essentials.

Earlier this year, Microsoft released a similar My Server app for Windows 8 and RT PCs. It would appear that this new Windows Phone version is an extension of the work done with the Windows 8 app.

Microsoft has released full Windows 8.1 remote desktop apps for iOS and Android devices, along with Mac OS X PCs. The company has already stated it will release a similar app for Windows Phone owners but there's no specific release date yet.