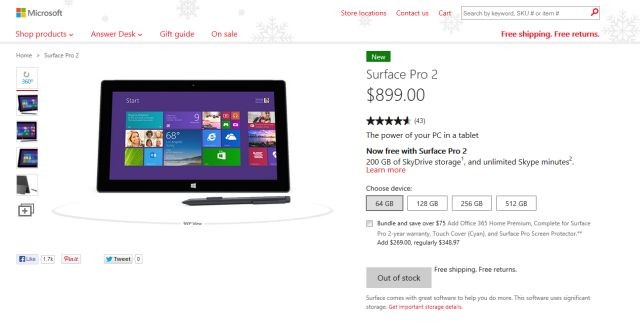 It's not just this site that is currently experiencing shortages of the Windows 8.1 tablet. Best Buy's webpage also shows that the 256GB and 512GB Surface Pro 2 tablets are "sold out online." The Staples site shows that the 512GB model is out of stock as well.

Add it all up and it appears as if demand for the Surface Pro 2, especially for the 256GB and 512GB models, is outstripping supply, close to two months after pre-order for the tablets began in September. Since we will soon be entering the biggest shopping period of the year, we have emailed Microsoft to get a status report on Surface Pro 2 tablet supplies and if there will be enough to meet demand in the next several weeks.