Microsoft Security Essentials has once again proven that it's not adequate for protecting a user's computer, after failing another antivirus test by scoring well below competitors' products. Dennis Technology Labs evaluated eight major antivirus programs from October to December 2012, awarding each program both a total accuracy rating and a protection rating, and in their testing they found Microsoft Security Essentials to be significantly worse than the other seven products on the test bed.

The total accuracy rating measures how a product manages to protect a system against malware, but also how it handles legitimate applications. Dennis Technology Labs awards points for stopping threats and allowing legitimate programs to be installed and run, while subtracting points when a threat fails to be stopped and when legitimate files are handled incorrectly. 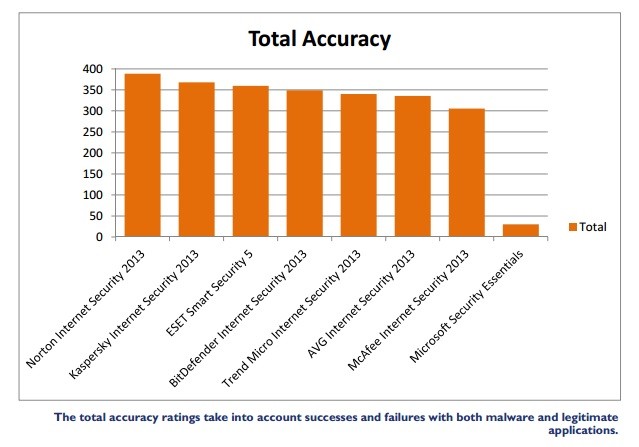 Total accuracy ratings can range from a maximum of 400 down to -1000: Microsoft Security Essentials scored a paltry 30 in this arena, while other products such as Norton Internet Security 2013 - which scored 388.5 - almost reached the maximum score. Awards are handed out for programs that perform to a decent standard, ranging from AAA to C, however Microsoft Security Essentials performed so poorly that it didn't qualify for any of the awards. All the other products gained an award, and five of them gained at least an A.

Next up was the protection ratings, which ranked a product on how it performed at handling malware only. Here points were awarded for neutralizing and defending against malware, while points were removed if a threat managed to run on a system; the best attainable score here was 300 and the worst was -500. Microsoft Security Essentials scored -70, the only program to score negatively, while most other programs scored between 250 and 300. 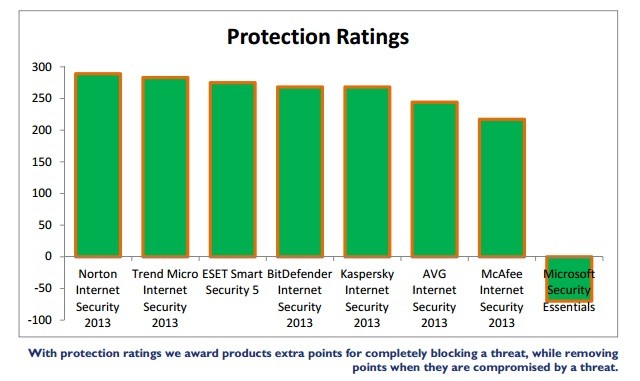 When looking more closely at the data given, it turns out MSE only protected against 59% of the sample range of threats, while the average was 92% protection and Trend Micro Internet Security 2013 managed a perfect score of 100% protection. On the positive side, Microsoft Security Essentials did not report any false positives during testing, the only product aside from Kaspersky Internet Security 2012 that managed this feat.

It should be noted here that MSE was the only free anti-malware solution tested, but even so it goes to show how inadequate Microsoft's product is against a proper paid anti-virus application. If you were going only by Dennis Technology Labs' tests, you should replace MSE with either Norton Internet Security 2013, ESET Smart Security 5 or Kaspersky Internet Security 2013, which were the top three best performing programs.