Microsoft finally launched iOS and Android apps for its Xbox Music streaming service in September, and today the company issued its first big update to the iOS version. There's just one feature added in this update, but it's a big one. 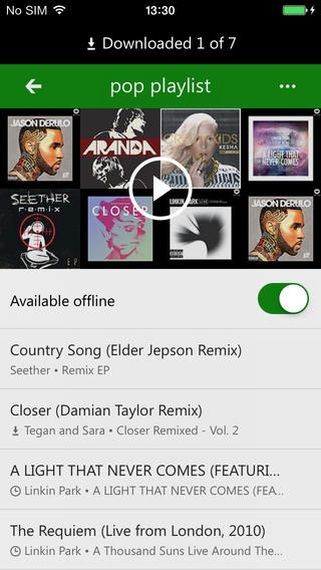 The iTunes store site shows that the new 2.0.31213 version of Xbox Music now adds the ability for users to listen to their playlists while offline. This will certainly be welcome news for people who sign up for the Xbox Music Pass as they will now be able to access their songs if there is not an online connection available. So far, the Android version of the app has not been updated with this feature.

Microsoft has been expanding the reach of the Xbox Music service in recent months. Besides the iOS and Android apps, the company launched a web-based version in 2013. It's also available for Windows 8, Windows Phone 8, Xbox 360 and most recently the Xbox One. Microsoft has yet to offer any concrete information on how many subscribers Xbox Music has signed up since it launched in 2012. The pass costs $9.99 a month or $99.99 a year.

Source: ITunes via The Verge | Image via Microsoft