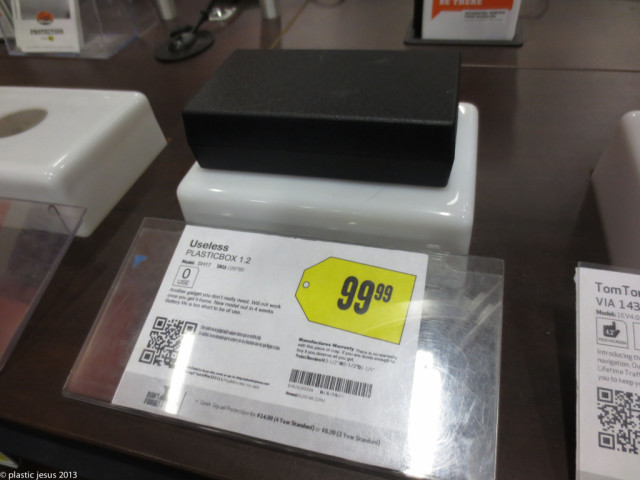 If you are one of those people who simply can't wait to buy the next technology gadget or product, and you happen to live in the Los Angeles area, you were likely the target audience for the prankster-artist known only as "Plastic Jesus". This week, it was revealed that he entered several Best Buy store locations in LA and quietly placed his own gadget on display next to some real products.

It was called "Useless PlasticBox 1.2" and, yes, it's just an empty box. "Plastic Jesus" did attempt to make the prank look a little more like the real thing by including a label that looked like a genuine one from Best Buy. Anyone who read the description on the label, however, was clued into the joke, as it said the Useless PlasticBox 1.2 was just "Another gadget that you don't really need." The price for the prank product was $99.99 and, as far as its warranty, the label said that there was none, adding, "If you are dumb enough to buy it you deserve all you get."

ABC News contacted "Plastic Jesus" who said that one of his prank gadgets stayed on store shelves for five days before it was discovered to be fake. A Best Buy spokesperson said all of the boxes have now been removed from its stores. There seems to be no hard feelings about the prank, with the spokesperson quoted as saying, "We are flattered that Best Buy is so top of mind for Mr. Plastic Jesus ... "

"Plastic Jesus" said that while his intentions were to be funny, he also had a serious message behind his actions. He admits to being a gadget fan himself but that, like many consumers, he comes away disappointed many times when buying the next big tech product. He stated:

If you call up Apple or Sony and tell them your product is a piece of crap or whatever, you are just complaining about a product that doesn't do what it should. I thought it was a very visual way of showing the message.

It certainly seems to be an effective one as the report claims that many Best Buy employees have reportedly emailed "Plastic Jesus" wanting to buy "Useless PlasticBox 1.2". In the end, it seems like this product-prank wasn't so "useless" after all.