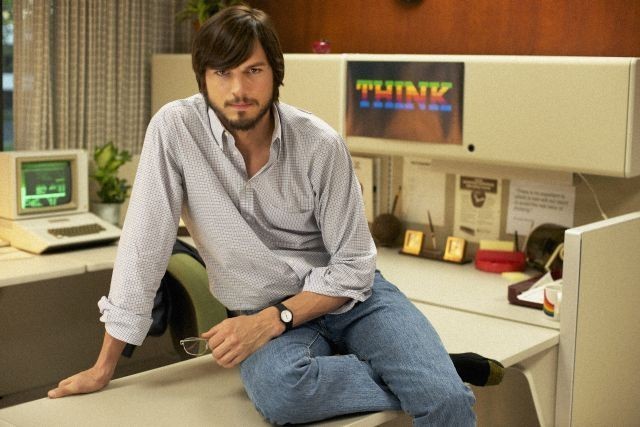 While there are lots of fans of Apple's products who routinely stand or sit in lines outside of stores waiting to get the next iPhone or iPad, there were no such lines in front of US movie theaters this weekend to watch the heavily hyped biopic of Apple co-founder Steve Jobs. The movie, titled simply Jobs, is estimated to have grossed just $6.7 million from 2,381 screens, placing it in a dismal seventh place on the box office charts.

The Hollywood Reporter states that the movie, which stars Ashton Kutcher in the title role, received just a "B-" score from Cinemascore, which polls select audiences as they come out of movie showings on Friday. In addition, the Rotten Tomatoes site, which averages the review scores of the major and minor movie critics, says that Jobs got a score of just 25 percent.

Even Apple's other co-founder Steve Wozniak wasn't all that thrilled about the movie. In a statement to Gizmodo, he said that while he was "entertained" and that "the acting throughout was good," it was not enough to recommend Jobs to others. He also seemed to blame Kutcher's "own image of Jobs" with what he felt was wrong with the movie.

The film was independently financed by Five Star Films for a mere $15 million, which makes its poor box office showing even worse considering it didn't need to gross a ton of money to become profitable. Kutcher filmed the movie in mid-2012 during a break from his work on the sitcom Two and a Half Men. In the past couple of weeks, Kutcher has been hitting the promotional circuit hard to hype up Jobs, appearing on TV talk shows and even ringing the opening bell at the New York Stock Exchange.