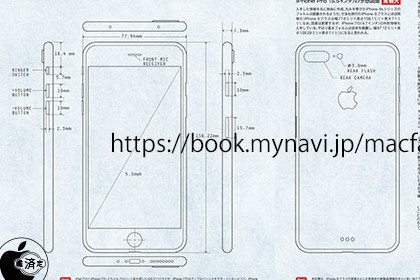 As unfortunate as it might be, leaks have become commonplace leading up to the announcement of Apple's iPhone. Although we have yet to get a proper visual of the unit, a schematic of the next iPhone has surfaced, giving us our first alleged look.

In the June issue of Japanese magazine MacFan, which has been made available by website Mac Otakara, we get our first glimpse of the next iPhone thanks to an alleged schematic. While the overall design comes as no surprise, the image does offer a few details, that could shed light on what Apple could be concocting for it next handset.

The schematic shows an iPhone that is devoid of a headphone jack, but also offers a look at the rumored dual rear camera setup. Instead of the protruding circular hump that was introduced with the iPhone 6 / 6 Plus, we now have an area that looks to be more oblong. Apple also looks to be borrowing from its iPad Pro line, as the bottom rear of the handset shows off what looks like a Smart Connector port, which could be used for new accessories or wireless charging.

Naturally, these are just alleged schematics for the next iPhone and things could change from now until the official announcement of the iPhone. Although excitement mounts for the release slated for later this year, analysts have stated that it will be next year's iPhone that will offer drastic changes, offering a truly worthy successor.