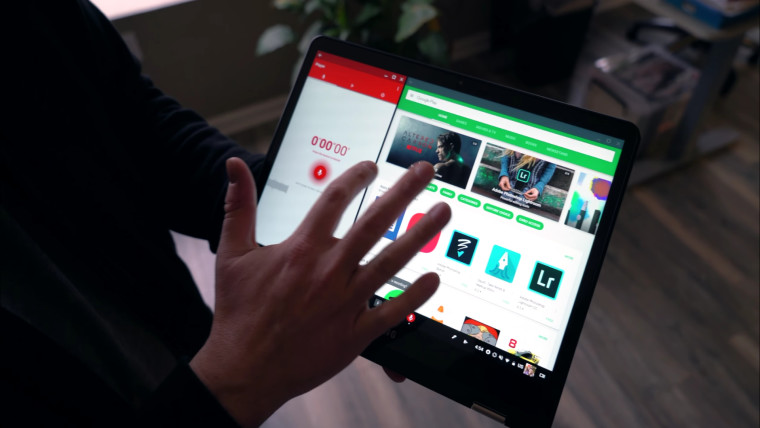 With OEMs such as Acer, Dell, Asus, and Lenovo increasingly adopting the 2-in-1 form factor for Chrome OS-based devices, and Google launching its own convertible, the Pixelbook, the company has been working to make the OS increasingly tablet and touch-friendly. Efforts to achieve better usability in tablet mode included the addition of Windows-esque split-screen snapping of two windows or two web apps side-by-side. However, an obvious omission was the support for split-screen snapping of Android apps.

The functionality was reportedly in development, which was discovered via a commit in the Chromium OS repository. However, today, according to reports, split-screen support for Android apps on Chrome OS is now available in Canary for users to try out. This feature works in tablet mode and can be enabled by setting the flag at chrome://flags/#enable-split-view.

Once the flag is enabled, apps can be snapped to either side by using the multi-task button to drag them to the edges of the screen in tablet mode. The apps can be resized vertically, similar to how resizing works when snapping two windows side-by-side on Windows 10. A current limitation is that the OS needs to be in tablet mode, suggesting that the feature will not work on traditional Chromebooks. However, it is safe to expect the feature to make its way to other traditional Chromebooks in the near future. Additionally, Android apps will have to support split-screen for the feature to work.

Features in Canary typically take a month or two to get to the stable channel. However, it may or may not take that long for this particular feature to hit stable channels as the underlying code for split-screen has already been present in the OS.

Below is an example video of the feature, posted by Chrome Unboxed:

This feature, coupled with the recent addition of the ability to run Android apps in the background makes tons of sense, as these apps can be used side-by-side without having to constantly switch between them.