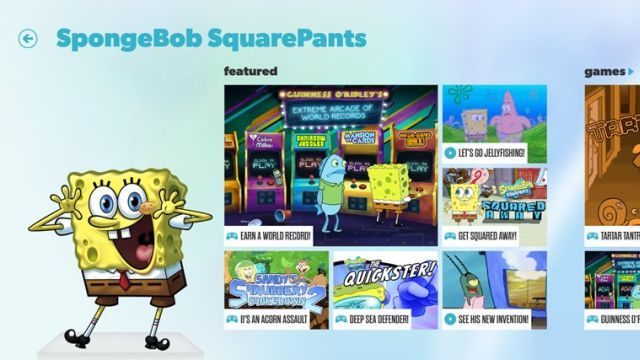 Who lives in a pineapple under the sea? SpongeBob SquarePants! Yes, one of the wildest and best children's TV shows of all time has made its official Windows 8 debut, thanks to the launch of the new Nickelodeon app today for Microsoft's latest OS in the Windows Store.

The new app has a lot of information for both kids and adults about our favorite living sponge, along with his friend Patrick, Squidward and the other residents of Bikini Bottom. There's also a game, SpongeBob's Jellyfishin' Mission, that can be checked out.

The new Nickelodeon app also has information on its other popular TV shows, including animated shows like Teenage Mutant Ninja Turtle and The Legend of Korra and its live action sitcoms such as iCarly and others.

Again, this shows that the Windows 8 platform is quickly becoming one that major companies and media organizations want to use to release their touch screen-based apps, just a few weeks after its general release. Hopefully, Microsoft will offer up some kind of official update on the status of the Windows Store and the number of apps that can be downloaded for its users.