Even though it still hasn’t found its way onto our desktops, in the world of supercomputers, Linux is king. Even Microsoft can't touch them there. Case in point: a new study showing that a whopping 94% of supercomputers run Linux.

Top500, a regular report on supercomputing stats, says that 469 of the world’s 500 most powerful computers are running Linux, up from the 462 they reported in June. The rest of the mix is mostly made up of Unix and BSD variants, but Windows isn’t left entirely in the cold – 3 supercomputers, up from just 2 in June, are running Windows, although unfortunately it looks like they’re restricted to Windows HPC Server 2008 and Azure. We’d love to see the Start Screen running on one of these babies!

Still, even though that’s a gain for Windows this year, it’s down from 4, the record number of systems running Microsoft’s OS, most recently achieved back in June of 2011. On the other hand, Windows’ pattern of growth pretty much lines up with the other non-Linux OSes, coming in fits and starts, sinking into near oblivion before pulling out to another high point. The only winner here is Linux. 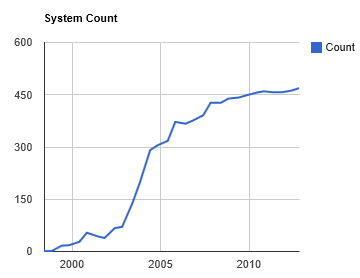 As the chart above shows, Linux is still steadily increasing its supercomputing marketshare. Why? For starters, it’s fast (some distributions can run at speeds as high as 17.59 petaFLOPS), and the fact that it’s limitlessly customizable can't hurt, either.

Not that that’s hurting anyone. Microsoft isn’t making their money by supporting the world’s top tier computers, so there's no need to waste your time waiting for the Year of the Windows Supercomputers. There’s way more of the green stuff to be made from selling to the little guys. Anything else is just icing on the cake.