Microsoft’s whirlwind Fall is drawing to a close. But following the most high profile departure from Microsoft since Bill Gates, Steve Sinofsky’s leaving is still drawing speculation and conclusion over why he left. And that’s not counting the more humorous side of the speculation! 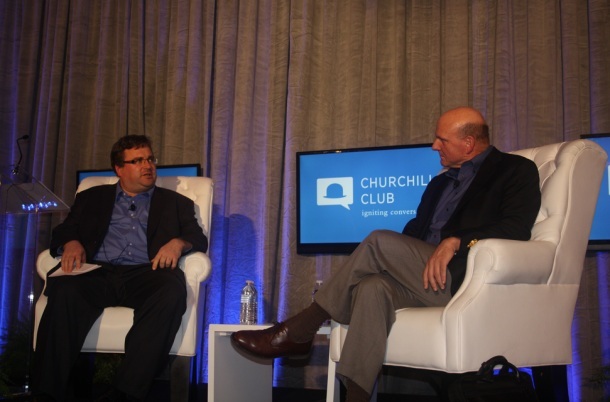 Steve Ballmer spoke with Linkedin co-founder Reid Hoffman at a Churchill Club event and when asked questions on Microsoft’s direction(s) for the future of management within the company Ballmer was quick to praise Sinofsky for what he did for Windows and the contributions he made to the company, but didn’t say much else around the man's leaving.

Steven has made one of most amazing contributions anybody will ever make to any company in terms of guiding key activities and engineering systems, I wish him well. He's always recommended if you make a change you make it on a product boundary.

Ballmer did point out that even though the new team members involved with Windows – Julie Larson-Green as chief of hardware and software and Tami Reller as the business leader for the brand – were less well known, Larson-Green has been “a driver behind the vision.”

Her unique product and innovation perspective and proven ability to effectively collaborate and drive a cross company agenda will serve us well as she takes on this new leadership role.

While there are stories surrounding infighting and personality clashes, a former Microsoft executive has said that Sinofsky was proving to be too divisive at a time when divisions within the company should have been working together for the common goal, a critical path Ballmer wanted the company to walk.

Ballmer is on this big kick to get different pieces of the company working together and Sinofsky had his middle finger extended.

But when all is said and done, maybe it should be up to Sinofsky to have the final words on why he left, no matter the reasons or whether they will ever become public knowledge.

Some might notice a bit of chatter speculating about this decision or timing. I can assure you that none could be true as this was a personal and private choice that in no way reflects any speculation or theories one might read--about me, opportunity, the company or its leadership. As I've always believed in making space for new leaders as quickly as possible, this announcement is effective immediately and I will assist however needed with the transition.