Temple Run, the wildly popular infinite running game that launched on iOS 18 months ago, has today reached Windows Phone. The app arrives without Xbox LIVE support, and in the form of the original version of the title, as opposed to the recently released Temple Run 2 on iOS/Android. 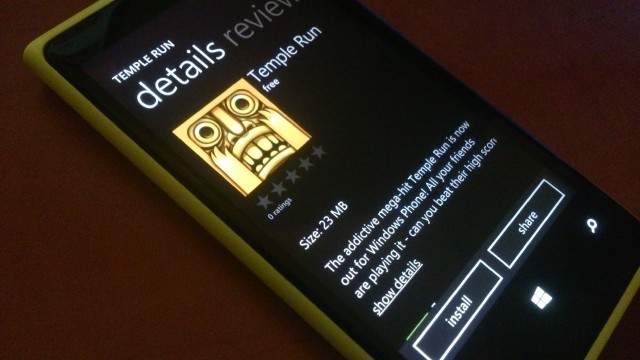 Microsoft announced that Temple Run joins 7 other games available from today in the Windows Store, including Gravity Guy 2 (launching as an Xbox LIVE-enabled title), 6th Planet, Propel Man, Orcs Must Survive, Ruzzle, Fling Theory and Drift Mania Championship. All will be available by the end of today.

With the introduction of new native code in Windows Phone 8, developers can port existing apps over to the new platform with ease. New game engines are available to take advantage of; however game developers consider it a slow process. The company has pledged 'big improvements' for developers, although many of the most popular casual gaming titles are still absent from the Windows Store.

Temple Run was created in 2011 by Imangi Studios, and later released in 2012 on Android. The game follows an explorer escaping from three demonic monkeys after stealing a golden idol from a temple, offering up randomly generated obstacles to dodge, as well as power-ups and coins.