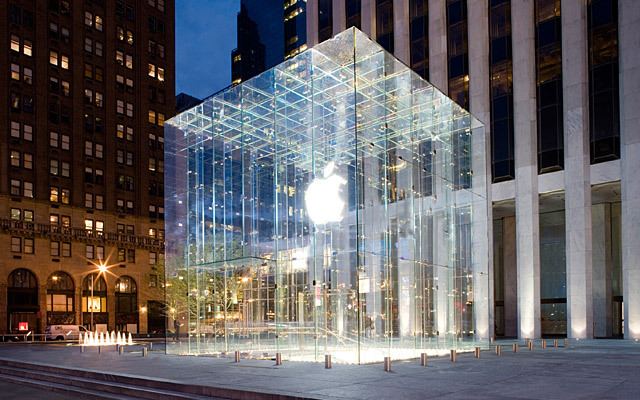 The year was 2001. In those days, the serif Apple Garamond font which dated back to the introduction of the first Macintosh still graced Apple's corporate identity, although it would soon be on its way out in favour of today's distinctive Myriad font. Mac OS X "Cheetah" made its rocky debut in March of that year, although most customers refused to jump off the classic Macintosh OS on their machines, choosing to stick with Mac OS 9 until a few years later with "Jaguar" and "Panther." Colourful machines was the key differentiator between Apple and non-Apple computers as seen in the original iMac and iBook G3. Compare that to the simplistic aluminum gray of today's Macs.

Apple's largest monitor at the time was only 22 inches. Today, you can get the 27" Apple LCD Cinema Display if you're willing to shell out a thousand dollars. And finally, the era of iPods was in its infancy, as the original Mac-only 5 GB iPod launched in October. No one in 2001 could anticipate the iPod craze in the middle of the decade, or the iPhone era towards the end of it.

On the other side of the fence, non-Apple computers faced a similar transition, although on a lesser magnitude in terms of software compatibility, as computers worldwide slowly got off the old DOS-based operating systems of Windows 9x and Me, and to the NT-based Windows XP, which launched in New York City in October. The launch of Windows XP opened to much fanfare in Times Square, at a time when New York was still recovering from the horrific disasters a month prior.

But there was another launch a few months back, not in New York, almost exactly 10 years ago to this date. It was Apple's first store at Tysons Corner, VA. Apple's iconic Fifth Avenue store in Manhattan came at the fifth anniversary of Apple Stores. The iconic glass cube continues to be Apple's top earning store, reportedly pulling in just under half a billion dollars in sales at the height of the most recent recession. Since then, Apple Stores have played host to hordes of people camping overnight in anticipation of Apple product launches, or even the launch of the store itself. Now that we passed Apple's tenth year anniversary of Macs, let's take a look back at what Apple stores might have been like ten years ago.

The following video was dug up by Cult of Mac, and shows a healthier and animated Steve Jobs demoing a concept of the Apple Store. Most of the store's elements remain intact to this day, but with some changes. The theatre at the back was phased out in favour of larger Genius Bars, which were smaller back then. The large store space dedicated for shoppers to surf the web on Apple's laptops and desktops was there (although with more security than shown in this video). The checkout counters were phased out in favour of on-the-spot ordering with printers hidden under the tables.

Update: Corrected an error regarding the first Apple Store.