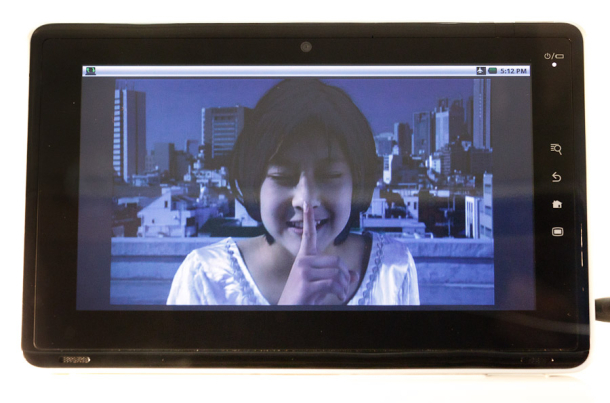 There has been has been plenty of exciting news about Samsung's Galaxy Tab this week. While it does seem like a neat device, some have voiced concerns having to purchase it it through a cell phone provider, and instead want just a Wi-Fi enabled device. Others expressed concern they may want something a little larger. If that sounds like you, Toshiba has come to the rescue with their new Android tablet, the Folio 100.

The tablet, according to CNET, is an attempt to more directly take on Apple's iPad. Toshiba's product has a 10.1 inch multi-touch screen with a resolution of 1024x600, which gives the Folio 100 a larger screen, but smaller resolution than the iPad. The tablet comes with a Nvidia Tegra processor, 16GB of memory, 1.3 megapixel Webcam, two USB ports, one SD card slot, and an HDMI connector. There is Wi-Fi and Bluetooth in all models, and in one model there is the added 3G capability.

The Folio is expected to cost $511 or 399 euros for the Wi-Fi only version, and $639 or 499 euros for the Wi-Fi plus 3G version. The weight is on par with the iPad at 760 grams, and it has a battery that will last for seven hours doing the following activities according to Toshiba: "used 65 percent for Web browsing, watching video for 10 percent, and idling for 25 percent."

To enrich the tablet experience, Toshiba will include Opera's Mobile Web browser, the eBook reader FBReader, Documents To Go, Evernote, Adobe Flash Player 10.1, and Fring video chat. In addition to these applications, there is also the entire Android library of applications available. Toshiba will be shipping this with Android 2.2, or Froyo, the same version that the Galaxy Tab has on it. The company also will include their "Toshiba Place" service that has a social hub, marketplace for music, videos, eBooks, and more.

The advantages of not having to buy this strictly from a cell phone dealer should boost sales, but this may also end up taking more of the market share from other Android tablets instead of the iPad. This should ship sometime in the fourth quarter in Europe and no word yet on when for North America.