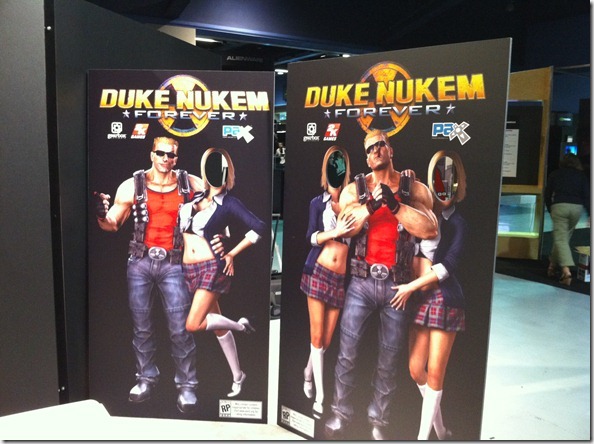 Duke Nukem Forever has been in an on again off again state for quite a while now. It's like a bad relationship you just can't walk away from. Duke Nukem Forever is supposed to be the sequel to the hit game, Duke Nukem 3D. Development started on Duke Nukem Forever in 1997 and many people were looking forward to its release. The game has had promotional material sent or leaked in 1997, 1998, 2001, 2007, and 2008. Each time something was announced it got everyone excited that the game may actually come to fruition.

In May, 2009, 3D Realms stopped development of the game for financial reasons which lead to publisher Take-Two Interactive filing a lawsuit against 3D Realms for failure to finish the project. Now it seems that lawsuit may have once again lit a fire under some developers to finish the game.

Take-Two, at PAX 2010, announced that Gearbox Software, developer of Borderlands, has been working on the game with an expected release date sometime in 2011. PAX is a three-day game festival for tabletop, video game, and PC gamers.

The booth for Duke Nukem Forever is showing two levels of the game and according to Wired, Gearbox CEO Randy Pitchford was shouting, "You cannot kill Duke. YOU CANNOT KILL DUKE!”

There's no telling if things will workout for Duke this time around but we can hope for the best!