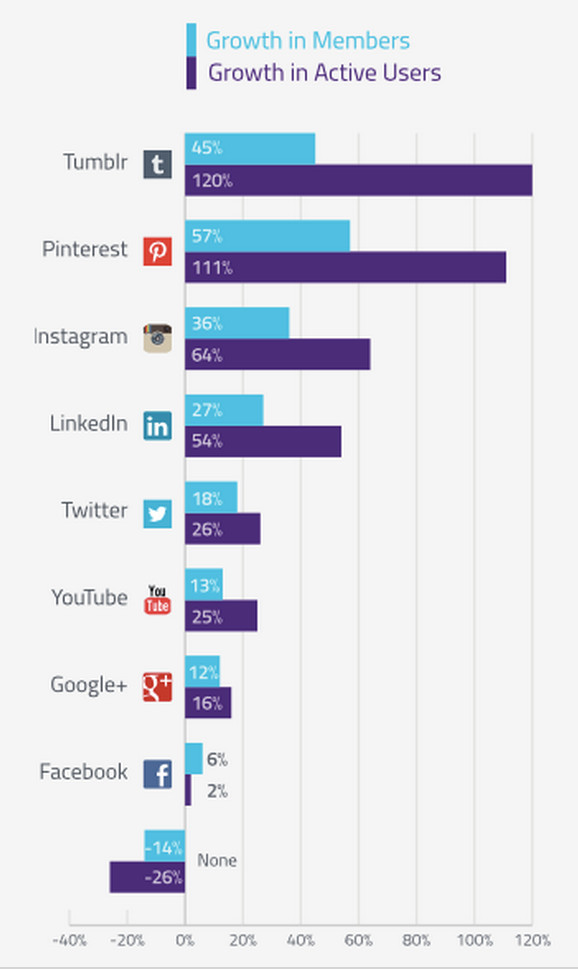 With 1.35 billion monthly users, Facebook might be the world's largest social network but it seems to have reached a saturation point. The latest report by Global Web Index claims that Tumblr is currently the fastest growing social network showing a growth rate of 120% in the past 6 months compared to Facebook's measly 2%.

Facebook fared quite poorly in terms of increase in number of registered users as well showing only a 6% growth rate these past six months.

Jason Mander, head of trends and author of the GWI report, writes,

Facebook has some major challenges to face. Firstly, people are growing tired of it, with 50% of members in the UK and US saying that they’re using it less frequently than they used to (rising to 64% among teens). Since the start of 2013, we’ve seen behaviors like sharing photos and messaging friends fall by around 20 percentage points.

Although Facebook is still one of the most popular mobile social apps to date, in terms of growth it has been overtaken by Snapchat, which leading the race by quite a long margin.

Despite Facebook's poor performance overall, Messenger, the social network's IM client, comes second in terms of growth which leads to speculation that the company should look to acquire other relatively smaller apps to fuel it's currently dismal growth rate.

You can read GWI's full report below by hitting up the source link.