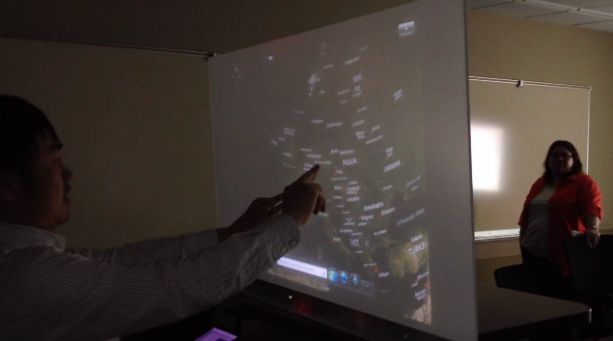 In April, Microsoft announced that 11 startup companies had been picked to participate in a new program called Kinect Accelerator. Microsoft would provided the startups with money, office space, equipment and more to get their Kinect-based software projects going.

One of the 11 companies that was picked by Microsoft was Ubi Interactive, a three-man team from Germany that is designing a way to use Kinect as the basis for software that could turn a wall or any surface into an interactive touch screen. Wired.co.uk reveals more about Ubi and its software.

A live demo of Ubi's product, which uses a regular projector along with Kinect to display and interact with the images, included playing with a 3D model of Earth on a wall, along with a game of Angry Birds. The article stated, "Responsiveness was excellent, with only a split second delay between performing a gesture and action happening on-screen."

The software itself is relatively cheap; Ubi said it will sell it to companies who want to use it for "close to $500". According to one of its developers, Anup Chathoth, "We are already deploying some advertising displays. It's attractive to a customer because of the cost, the ease of deployment; it's portable -- an 80-inch screen you can carry inside a laptop case -- it's flexible and it's also an engaging experience."