Windows Phone 8 is an inevitability, but it has been one that many users have been unsure of. Due to the probable change to the core of the operating system, there have been doubts of whether it will remain cross-compatible with apps. A tweet from Microsoft's Director of Developer Experience has confirmed it, as WPCentral confirms. 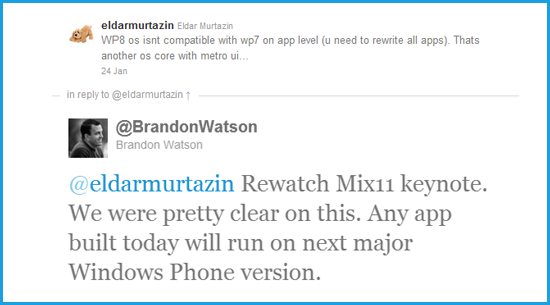 For anyone who missed the Mix11 keynote, some videos of it have been preserved here. Brandon Watson is Microsoft's Director of Developer Experience for Windows Phone, so his response can be taken to be the truth. Speaking technically however, it is unclear how Microsoft plan to make it work. If Windows Phone 8 boasts a higher resolution it will be odd to see how apps work, and whether they zoom in to be used or not. That in itself could be problematic for developers of Windows Phone 7 apps.

On the plus side, transitioning the apps may not be extremely difficult since they make use of Microsoft's SilverLight. This means that they could theoretically be ported very quickly, if they were not cross-compatible already. What is known of Windows Phone 8 at the moment is only that it may use the codename of 'Apollo'. The current version, at the time of writing is Mango, and it is scheduled to be updated to Tango in the future.