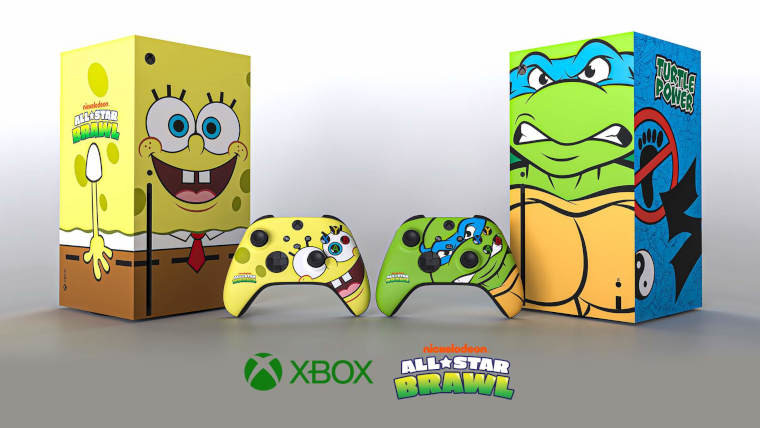 To celebrate the launch of Nickelodeon All-Star Brawl, Xbox has created two custom Xbox Series X consoles; one featuring SpongeBob SquarePants and another featuring Leonardo from Teenage Mutant Ninja Turtles. The consoles are only being given away through a sweepstake but it’s really easy to enter and anyone over 18 can participate as long as they live in an Xbox Live supported region.

To join in the competition, you simply have to retweet the Xbox sweepstake tweet between now and 8:00 p.m. PT on October 24. At the time of writing, the tweet has received over 13,000 retweets so your chances of winning one of the prizes are slim, that said, the barriers to entry are very low and it literally takes ten seconds to enter so it’s worth doing.

Follow and RT with #XboxAllStarBrawlsweepstakes for a chance to win one of these vibrant @NickBrawlGame Xbox Series X consoles.

“The custom Xbox Series X consoles celebrate the beloved Nickelodeon characters in the designs. The Leonardo-inspired console features the visage of the iconic hero alongside his favorite food: pizza! Inspired by the playfulness of the world’s most lovable sponge, the custom console perfectly brings to life SpongeBob SquarePants in its shape and feel.”

If you’ve already got an Xbox Series X|S or Xbox One, you can buy Nickelodeon All-Star Brawl right now for the discounted price of $39.99 (RRP $49.99).