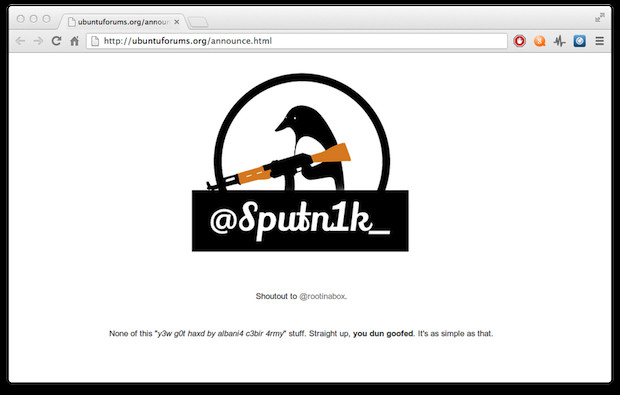 The Ubuntu forums are the latest to suffer a data breach, from a hacker, taking place last night. An estimated 1.82 million accounts have been affected and at the time of writing the site is still down for maintenance.

According to the placeholder page currently on the Ubuntu site, only the forums were affected with Ubuntu One, Launchpad and other Ubuntu/Canonical services escaping the breach. The page also asks that although passwords were not stored in plain text, users who use the same password for multiple services such as email are "strongly encouraged to change the password on the other service ASAP." They also specifically admit that the hacker going by the name of @Sputn1k_ managed to grab "every user's local username, password, and email address from the Ubuntu Forums database."

The Twitter account currently only has 5 Tweets which are seemingly unrelated to the hack, with only 83 followers at the time of writing; but that hasn't stopped users of the Ubuntu forum reaching out to slam the hack.

@Sputn1k_ You must feel proud defacing a site by volunteers. They dedicate time and effort to make a free distro. Worst kind of "hacker"

Some users even opted to reach out and try to find out what the music was that was loaded into the page briefly before it was taken down.

The replaced page also linked to a "shoutout" to Twitter user @rootinabox, who appears to be based in the Netherlands and last tweeted just over two weeks ago.

The Ubuntu forums uses vBulletin, which is a popular web-based forum software.