Good artists copy and great artists steal. Unless, of course, you are one of the parties involved in today's patent wars that continue to plague the tech industry and dominate media outlets with tasty fodder.

Lawyers representing Apple attempted to do just that today, by releasing an internal document from Samsung's Product Engineering Team. The 132-page document, translated from Korean by a third party, outlines a laundry list of comparisons made between various facets of then-iPhone OS 3.x and Samsung's take on Android with TouchWiz. The document was almost fully critical on decisions made by Samsung, with each slide pointing out the advantageous qualities of Apple's implementation and recommended suggestions for improvement. 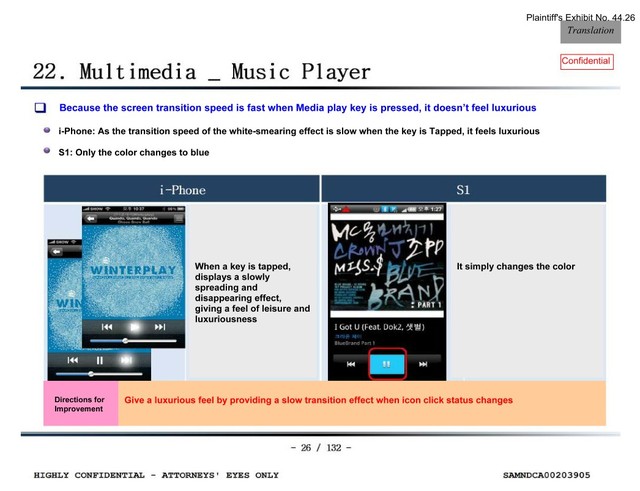 Some of the suggestions relate to UI features unique to iOS - tapping the status bar to scroll to top, a magnifying glass for moving the text cursor, and - at the time - visual 'pleasers' such as animations for deleted emails, using images as attachments, and deleting notes. However, some of the slides also convey poor user interface decisions made in TouchWiz and Android. Examples cited include the ability to add blank pages as bookmarks in the browser, the ambiguous Email and Messaging icons (both are envelopes), and the then-added complexity of returning to an active phone call while using the device.

It should be noted that while Apple will attempt to use this document in supporting their arguments of Samsung "copying" their designs, the onus is on Apple to prove that the document contained suggestions that directly led to a violation of a design patent Apple holds - for instance, Apple's patent on "rubber band" inertial scrolling. Many of the suggestions in this document are vague enough to convey a motion for improvement without suggesting a "copy" in any way.

In addition, Apple has a few UI oddities that the document indirectly points out. For example, the ability to double tap the top or bottom pages to do a slight scroll isn't made obvious to new users, and is in fact quite quirky in real world use - try it on Neowin's mobile site as an example. In addition, Android's keyboard clearly indicates to users whether the keyboard input is in uppercase and lowercase characters, while iOS maintains an uppercase keyboard, leaving the colour of the Shift key as the only visual distinction. 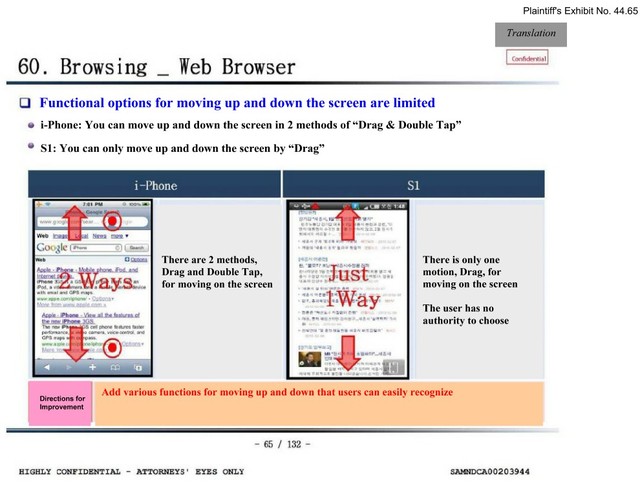 At the end of the day, Apple is quite unlikely to use this document as proof of patent infringement, if any. A Samsung spokesman reiterated this point in a comment to AllThingsD, stating that competitive analyses such as the above document are standard in the industry. In lieu of that, however, the existence of this document may serve to sway the decisions of the jury in favour of Apple come deliberation time.

Thanks Damian for the tip in our forums.

Via: The Verge
Source: AllThingsD