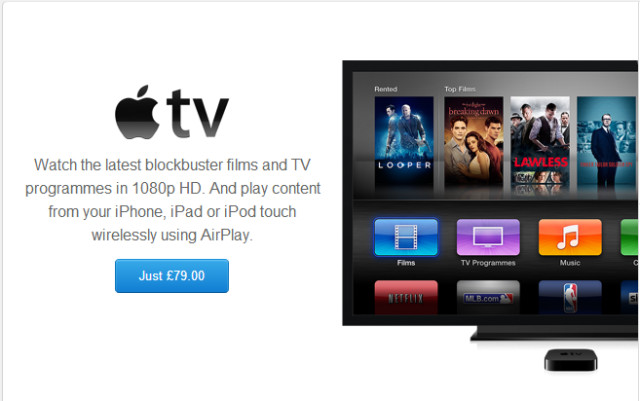 After launching a new cheaper $1,099 iMac earlier today, Apple has slashed the price of its media-streaming Apple TV set-top box in the U.K. and Europe; U.S. pricing has not changed. U.K. readers can now pick up an Apple TV from the company's online store for £79, while those in continental Europe can purchase the set-top box for €99. Previously, the unit was priced at £99 and €109, respectively.

CNET reports that the pricing changes were first noticed after Apple's online store returned earlier this morning. It had been absent for a brief period while it was updated to show the newly-launched 21.5-inch Intel Core i5 iMac.

Although no reason has been given for the price drop, it could have been influenced by the fact that several reports have indicated that Apple is currently working on a substantial refresh for TV. It could also enable the product to compete better against other low-priced set-top boxes in the U.K. such as the £30 Google Chromecast or £10 Sky Now TV.