A new report has indicated that almost one in five small and medium-sized businesses are still using Windows XP despite official support having ended for the ageing operating system over two months ago.

BetaNews reports that security experts Bitdefender found during a three-month worldwide survey that almost 19% of SMBs still actively use XP, launched in 2001, on a daily basis. Many appear to have a noticeable sense of disregard for the potential security implications of doing so. 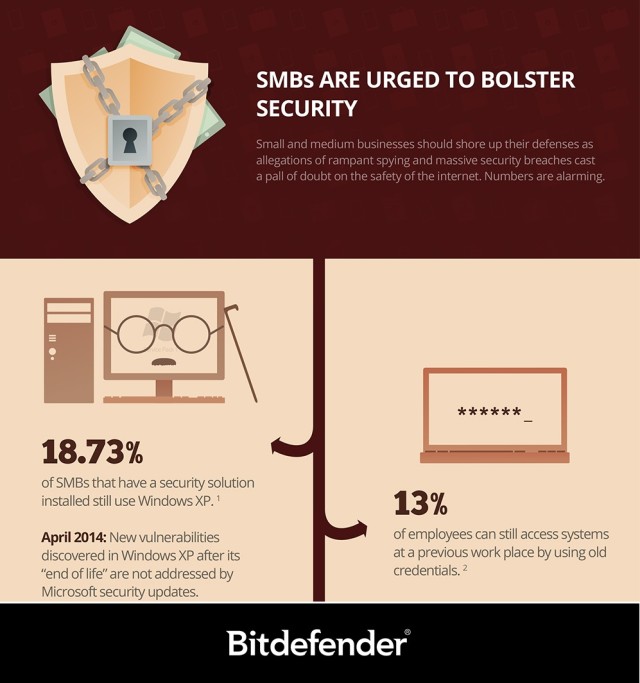 Bitdefender's Chief Security Strategist, Catalin Cosoi, explained how the continued usage by so many firms could be derived from Microsoft's decision to release a patch for a critical zero-day vulnerability in the company's Internet Explorer web browser for XP users just weeks after the end of support. As Microsoft does, Cosoi warns that users should not count on this happening again, saying

"this was an exception that shouldn’t make enterprises believe it will happen again, so the migration from XP is a must."

The study comes after the recent discovery that a Windows XP registry tweak can be used to trick the Windows Update servers into allowing the download of new updates past the end of support.

Another interesting fact uncovered by Bitdefender's report, undertaken from March to May this year, is that 13% of employees are still able to login to computer systems at companies they worked for in the past using old credentials as accounts are not deleted.

The study looked at over 5,000 SMBs and found that 18.7% of them still run Windows XP. The majority, at 53.4%, ran Windows 7 Professional which has long-term support from Microsoft until 2020 whereas only a small minority had Windows 8.1, the newest version of the operating system.

Bitdefender themselves are amongst many antivirus software providers who are going to continue to support XP with their own products for several years to come. Bitdefender will end support for their products on XP in January 2016 and January 2017 for business users so there is a conflict of interest here but the statistics are still considered representative of the SMB market.