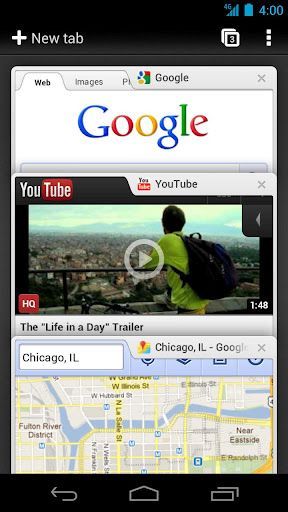 It's taken a few years but today, Google is finally starting to offer up a version of its Chrome web browser for Android users. Today, the Android Market released a free beta version of Chrome for Android. This first public beta is limited to owners of Android 4.0 (Ice Cream Sandwich) devices. That includes the Samsung Galaxy Nexus smartphone.

The YouTube video shows off one of the features of Chrome for Android: the ability to sync up to Chrome on your PC to get the same bookmarks and even view the same browser tabs on the mobile version. You can even send pages from the PC version of Chrome to the Android version and read those pages online or offline.

The developer's page for Chome for Android reveals more about the web browser, including word that it supports opening an unlimited amount of tabs. Google states, "To switch between tabs, flip through them on your phone the way you would fan a deck of cards, or swipe from edge to edge." It also has a feature called Link Preview that allows its users to zoom in on links so they can be sure to click on the right one.

Chrome for Android also has a feature called Find in Page that lets its users search for a specific word on a web page and then see where that word appears on that particular web page. The Incognito mode will allow users to surf the net without having to worry about storing any history files or caches on their mobile device.

There's no word on when Google plans to release Chrome for Android for older Android operating systems.