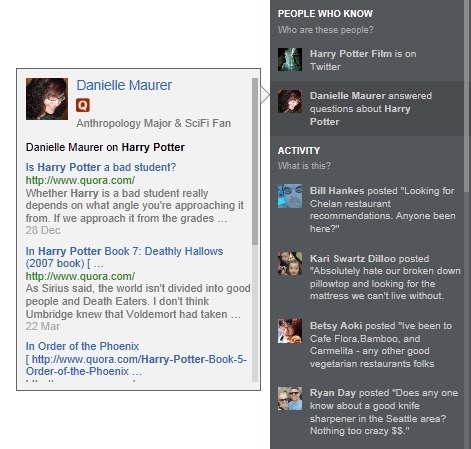 Microsoft keeps making new changes and additions to its Bing search service. In the space of just a few months, it has revamped its homepage, added Facebook support to its search results, created a new look for its image searches tool and most recently added support for Foursquare results. Today, Microsoft had added yet another new feature to Bing.

In a post on the official Bing blog, Microsoft announced that its search sidebar will now offer answers to questions based on contributions from the Quora knowledge sharing service. Quora, founded by two former team members from Facebook, first launched to the public in 2010. Microsoft said:

Now with Quora contributors on Bing, you'll see top answers and posts on a variety of topics -- from Movies to Politics. Starting today, users in the U.S. will begin to see top Quora contributors in the Bing sidebar. You can hover over their name to learn more, and click to go directly to the answers they have shared, bringing the wealth of shared knowledge on Quora to Bing users.

There's no word on when the new Quora support will be put into Bing's search results in other countries.